Live Forever: The Rise and Fall of Britpop 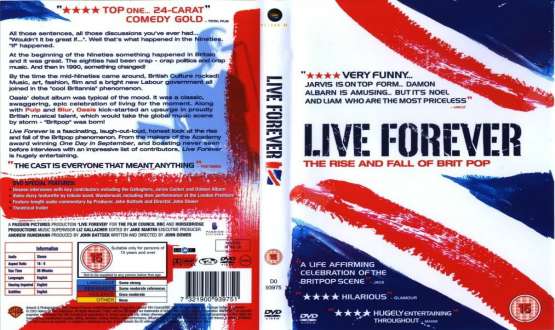 LIVE FOREVER: THE RISE AND FALL OF BRIT POP is a 2003 documentary film written and directed byB.

The documentary is a study of popular culture in the United Kingdom during the mid to late 1990s. The focus of the piece is British popular music (BRITPOP), which underwent a resurgence during the mid-1990s and then seemingly retreated with similar haste towards the end of that decade.

The political landscape of the time also features. Much is made of TONY BLAIR and NEW LABOUR's efforts to align themselves with the distinctly British cultural resurgence that was underway. The documentary features a number of prominent UK musical and artistic figures, but relies heavily on contributions from NOEL & LIAM GALLAGHER OF OASIS, DAMON ALBARN OF BLUR AND JARVIS COCKER OF PULP. Other contributors include 3D from MASSIVE ATTACK, Louise Wener from Sleeper, fashion designer Ozwald Boateng and modern artist DAMIEN HIRST.