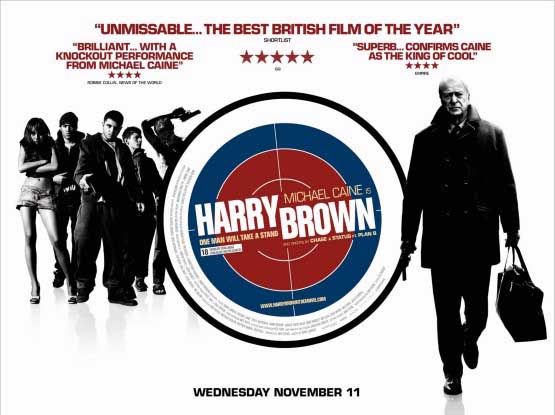 HARRY BROWN is a 2009 British vigilante film directed by DANIEL BARBER and starring MICHAEL CAINE, EMILY MORTIMER, JACK O'CONNELL, and LIAM CUNNINGHAM. The story follows HARRY BROWN, a widowed Royal Marines veteran, who had served in Northern Ireland during The Troubles, living on an Elephant and Castle housing estate that is rapidly descending into youth crime; HARRY fights fire with fire after a friend is murdered.

The film also features actor and artist Plan B who, with Chase & Status, is also responsible for the film's theme music track "End Credits."

HARRY BROWN had its World Premiere as a "Special Presentation" at the 2009 Toronto International Film Festival and was released theatrically in the United Kingdom by Lionsgate UK on 11 November 2009; the film was released in the United States by Samuel Goldwyn Films and Destination Films on 30 April 2010.

The film was mainly filmed on and around the mostly abandoned Heygate Estate in Walworth, London; which was due to be demolished in late 2010. And the subway filming at Marks Gate, London.