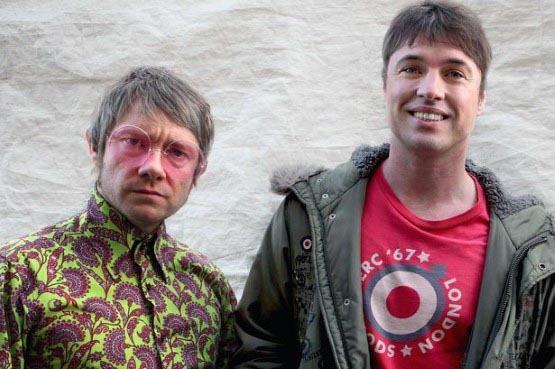 We chatted with JONNY OWEN (Welsh producer, actor and writer who has appeared in TV shows includingSHAMELESS, MURPHYS LAW and MY FAMILY) about his latest movie SVENGALI and he told us everything about the film, his influences, his passion for music, working with MARTIN FREEMAN and his love for OASIS.
Read the exclusive interview below with the main star of SVENGALI what the press called "A superb taste of British Cinema" or as IRVINE WELSH said "One of the funniest British movies in ages"

KUL BRITANIA: SVENGALI...new film but Well JONNY first of all why dont you start telling us a bit about yourself? We know you are very passionate about music  and actually in your late teens- if we are not wrong- you were in a band yourself right? What can you tell us about your musical influences? and those years in a band?

JONNY OWEN: I was very lucky in that I came from a music loving family. My Paternal Grandfather had a semi professional career as a singer. He was well known in South Wales (where I'm from) and sang on the BBC RADIOin WALES. My older brother was a Punk. This would have been about 1976 when THE PISTOLS first hit and he had all their stuff. He would let me into his bedroom to listen to records and I can actually remember well him playing GOD SAVE THE QUEEN and jumping around the bedroom with him! A little bit later I fell in love with THE JAM and it really started from there. My brother also gave me QUADROPHENIA on a VHS and I distinctly remember thinking 'I want to be one of them!!' Ha. And so it began.

KB: WHY DON'T YOU TELL US AND OUR FOLLOWERS ABOUT SVENGALI? HOW DID YOU COME UP WITH THE IDEA?

JO: It was in London in late 2008. I'd moved there and my good friend ROGER EVANS was there as well and we decided to film some 'shorts' and put them on the net ourselves. DEAN CAVANAGH and PHIL JOHN helped us (along with my then wife) and we got a bit of momentum going with some good reviews and people sharing it. On the second episode ALAN MCGEE got involved and it really started picking up attention then. I had come up with the name 'DIXIE' for the character and the fact he was a MOD. It just seemed to work. There was all the other stuff like the tesco bag and cassette tapes people loved and it just kept growing with each episode. 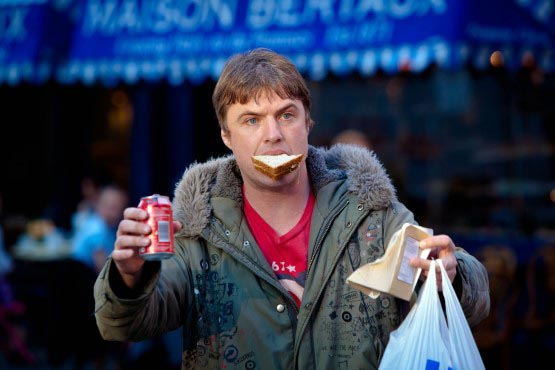 JONNY OWEN in his role as "DIXIE" a self obsessed MOD

KB: WHAT DO YOU REMEMBER ABOUT THE FIRST WEBISODES DESCRIBED AS "THE BEST SERIES IN THE WEB"?

JO: I can remember they were a lot of fun to do. We had to be quick and nimble (as we didn't have permission to film) and we improvised pretty much most of it. We'd have a basic idea but then would kind of spar out what we'd do and how and then take it from there.

KB: HOW DID THIS WEBSERIES THEN RECEIVE THE BIG SCREEN TREATMENT AFTER THE YOUTUBE SUCCESS?

JO: It was really very straight forward. A private investor got involved as they loved the idea. There was a guy called MARTIN ROOT who ran a creative design agency and he was the one who saw the potential and said that he could raise the finance and he was as good as his word. It was then just a case of expanding the script into a film and shooting it. 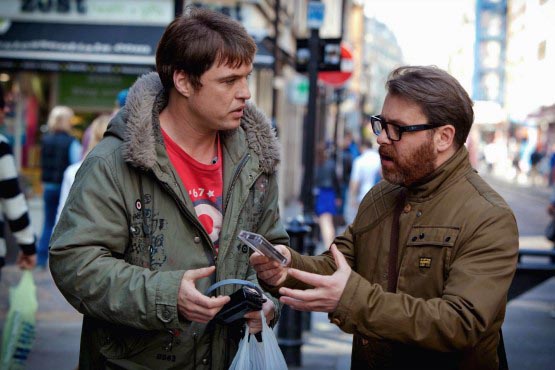 "DIXIE" in LONDON wearing his parka holding his walkman

KB: WHAT WAS THE DIFFERENCE - YOU'D SAY- BETWEEN SVENGALI AND YOUR PREVIOUS JOBS LIKE IN THE SERIES SHAMELESS WHERE YOU WERE A REGULAR CHARACTER?

JO: It was different in that I was much more involved because I was the writer and producer. I preferred it forSVENGALI because I had a vision I suppose. Of how it would be and so I was very hands on in everything. It was a great experience and something that I'd certainly like to do again.

KB: AS THE WRITER AND CREATOR OF SVENGALI IS THIS THE FILM YOU ARE MOST PROUD OF?

JO: Yes it is. Simply because I was involved in everything from day one until the end. It's kind of my baby really so I'm naturally very attached to it. Also I can stand or fall by it. It was all totally my choices and because of that there is no one to blame but yourself.

KB: THE CAST ARE JUST EXCELLENT: VICKY MCCLURE, MICHAEL SOCHA, ALAN MCGEE AND EVEN MARTIN FREEMAN? WHAT WAS IT LIKE TO GET THEM ALL TO PARTICIPATE IN THE FILM?

JO: It was great! I got to work with some amazing people. The casting of something you write is absolutely the best part of it because it's where you see it all come to life. I genuinely loved working with them all. 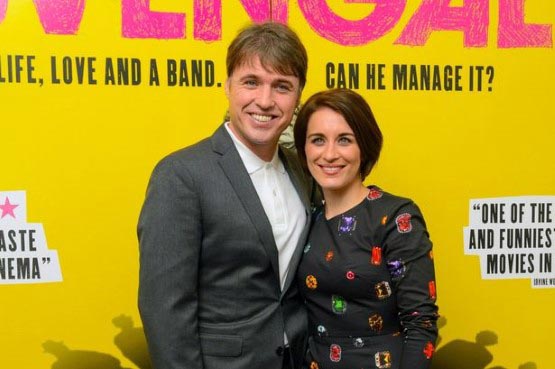 KB: WE SAW A VIDEO SOME TIME AGO WHERE YOU AND MARTIN FREEMAN WERE AT THE PRETTY GREEN LAUNCH PARTY , HAVE YOU KNOWN MARTIN FOR LONG? WHAT CAN YOU TELL US ABOUT HIS ROLE IN SVENGALI?

JO: I've known him through a mutual friend (PAOLO HEWITT) about three years now. He's a lovely guy who was pivotal in the film getting made. He plays 'DON' a LONDON UBER MOD. The type who thinks that to be a MODyou have to dress and behave a certain way. He does it brilliantly too. His comic timing is superb and he was fantastic to act opposite. It's like being a footballer and getting to play with Messi on your side!

KB: SPEAKING OF PRETTY GREEN , DO YOU KNOW LIAM GALLAGHER PERSONALLY? WERE YOU A MASSIVE OASIS FAN BACK IN THE DAY?

JO: I've met LIAM but I don't know him. I was a huge OASIS fan. I still am. I went to see them many times and bought all their stuff. They are one of our great Rock and Roll bands in my humble opinion. His label PRETTY GREEN have been superb supporters of the film and I'm very thankful for that as their audience is very similar toSVENGALI'S.

KB IN THE FILM, THERE ARE TIMES YOU ARE WEARING A NORTHSIDE T-SHIRT AND IF IM NOT WRONG A ROSES T-SHIRT TOO, WOULD YOU SAY YOU ARE MORE INTO THE MANCHESTER MUSIC SCENE OR THE LIVERPOOL MUSIC SCENE?

JO: Both!! I love both cities and the bands they have produced from THE BEATLES to THE ROSES. I have bands from each on the soundtrack like THE STAIRS and THE FALL. I think the two cities have been pivotal in Rock and Roll history and I love them dearly for that. It's no exaggeration that without them I wouldn't be doing what I am today. It was seeing THE BEATLES in particular that made me want to be in a band.

KB: GOING BACK TO SVENGALI, HOW WOULD YOU DESCRIBE DIXIE? (ARE YOU LIKE DIXIE IN ANY WAY - ARE YOU A SELF OBSESSED MOD YOURSELF?)

JO: Well he's a music obsessive and I am too. I wouldn't say I'm exactly like him, similar sure, but he's more loveable than me! Ha. We certainly share a similar passion for things like music and fashion. I also think he's braver than me. He will literally approach anyone in a way I never could or would. I recently seen BILL NIGHY at the BBCand I couldn't work up the courage to say hello. DIXIE would have!!

KB: THE FILM SAW ITS PREMIERE A FEW WEEKS AGO IN WALES. YOU WERE BORN AND BRED THERE,WEREN'T YOU? IS THAT WHY YOU CHOSE THAT THEATRE THERE?  WE SAW A VIDEO OF THE TRIUMPHAL ENTRY INTO BRYNMAWR IN WALES WHICH WAS PRETTY SPECTACULAR. WHAT CAN YOU TELL US MORE ABOUT THAT?

JO: I am Welsh born and bread and I did ask for it there for that reason. I chose the venue because it's the oldest cinema in WALES and I thought that would be a fine tribute to the place and it's staying power. I also managed to persuade a few local scooter clubs to turn up, and some Rockers, and it looked fantastic. It got us a lot of attention and I'm delighted about that. 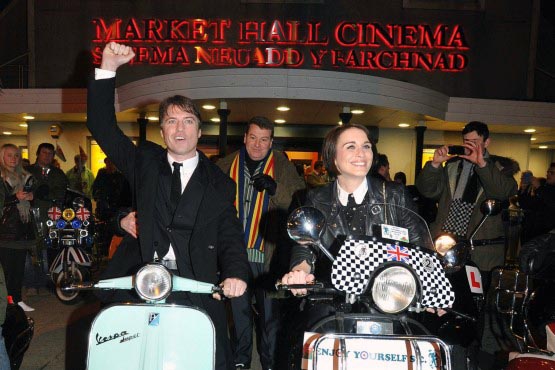 JONNY OWEN and VICKY MCCLURE and their triumphal entry into BRYNMAWR in Wales.

KB: WHERE WAS THE FILM MAINLY SHOT JONNY CAN YOU TELL US?

JO: It was shot in LONDON, WALES and SCOTLAND. We used slightly different colours for each location to reflect where he was. I also made sure London was as busy as possible because the pace there is incredible. When you first arrive it takes your breath away and I wanted the film to reflect that. I also wanted it to slow down inWALES and SCOTLAND which is much more rural in its setting.

KB: HERE AT KUL BRITANIA WE LOVE MUSIC AND THE SVENGALI SOUNDTRACK , IS IN OUR HUMBLE OPINION, AMAZING. WHAT CAN YOU TELL US ABOUT THAT? DID YOU CHOOSE THE TRACKS YOURSELF?

JO: It was myself and JOHN HARDWICK the director. He was brilliant in helping and chose MOTT THE HOOPLEand THE FALL. I did really want tracks like 'SOMEBODY STOLE MY THUNDER' by GEORGIE FAME and was lucky enough to get them because of our music advisor IAN NEIL who is the best in the business. I'm delighted Universal out it out as a soundtrack. It's been getting a great response. 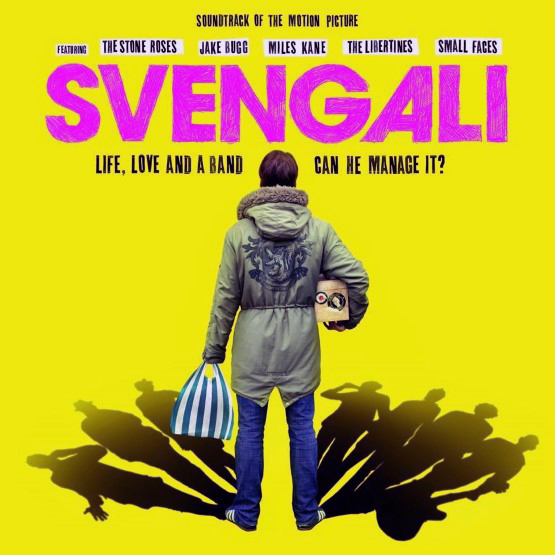 KB: WHAT'S NEXT FOR SVENGALI AND ARE YOU WORKING ON ANY OTHER PROJECTS AT THE MOMENT?

JO: I've just landed a part in a new CHANNEL FOUR series in the UK which I start tomorrow. I've also done a script called 'Schemers' set in late 70's SCOTLAND and based on the young life of DAVE MCCLEAN PLACEBO'Smanager. That should be fun and hopefully will go into production later this year.

KB: THANK YOU VERY MUCH JONNY.

JO: Thank you and love to you all!

Get your Svengali film now !! For more information on the movie and where you can buy it , you can visit their official Facebook and their official page svengaliemovie.com

SVENGALI IS BACK IN CINEMAS IN THE UK NOW

Below you can watch SVENGALI trailer