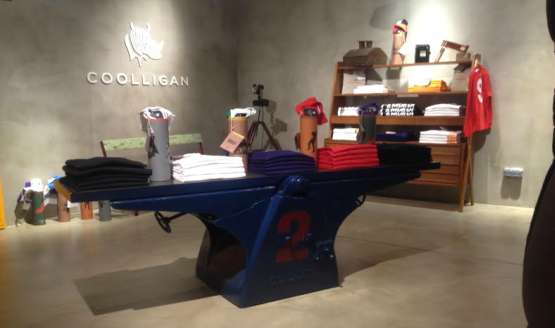 We had the chance to do an interview with Jon segovia one of the founders of COOLLIGAN; a Spanish brand which is inspired by football and football legends. Read the interview below.

KB: How and when did you start Coolligan?

C: The market debut of COOLLIGAN was in late November 2014. Despite all the noise we're making, we're still pretty young.

The idea came from two partners, who observed that there was a strange empty space in the fashion market . We realized that fashion was based on minority sport like polo or rugby, but nevertheless, paradoxically there was nothing similar to the king of sports, and that's where the idea of COOLLIGAN came from.

KB: What are your main goals?

FASHION, because that is the vehicle through which we want to socialize football culture.

FOOTBALL, because our inspiration source are the great legends of football.

RETRO, because what we really sell are emotions. And it takes time to turn a star of the moment into a legend. All our garments are linked to a particular legendary event. In fact, they are accompanied by an illustrated book that explains its history (imprinted in the inside of every garment too)

KB: It seems there's a growing interest for brands like yours...can you explain why?

C: It's a logical evolution, football is an increasingly large social phenomenon and it is expected to become a generator of cultural trends. A clear example is the casual movement born in the british football fields, especially Liverpool .

In any case, we believe there's still room enough and the reason that the artistic part has not been developed could be because of the strong link between the symbols of football and the commercial register of those symbols, owned by football clubs whose current interest is largely focused on the lucrative side of sport.

KB: Do you follow football? Who do you support?

C: Of course we are! We sympathize with those clubs, and especially fans, who are able to see beyond a match, with those who see football as a social movement in the streets for over 150 years. You may like it or not, but football is part of your life. You 'll find out the result of the team in your city , just as you find out what happens in politics even though you're not paiyng attention to the news. Football, isn't only in stadiums, football is on the street, it permeates our lives like other social phenomena such as music or art.

KB: Music and footbal have always been linked in the United Kingdom. What are your favourite british bands?

C: Ooh... The list is pretty long. In fact you could only listen to 60's-70's music in our store at Madrid Xanadu. That's because we think that kind of music is very linked to football and our store style, it recalls the origins of the game. It is unfair to name just a few, but well... from The Kinks to The Animals or from The Beatles to The Clash, they belong with COOLLIGAN without any doubt!

KB: What are the plans for the coming season?

C: Next spring/summer we're going to surprise everyone with some African attractive shirts. Not only well known myths have a place at COOLLIGAN, we also love much more modest teams but with a daring attire. We're talking about Malawi, Ghana, Mali,...

KB: Where is your main store?

C: In the Madrid Xanadú shopping center (km. 22 of the A5 motorway to Extremadura). It's simply beautiful. In fact we have been suggested to take part in the biggest contest worldwide, the Visual Victory held in May in the USA. Our store has a different style. It's kind of a museum-shop: there's no windows and the gate looks like a hangar, the walls and floor are made of concrete, recalling old school stadiums. A giant three-meter long football boot dominates the store and it is accompanied by several vintage objects: boots from 1936, lockers from 1940, old cabinets... And we've got vintage metal machines instead of sideboards. A marvel.

KB: Any plans for expansion in the UK; Europe, America any time soon?

C: Yes, it's still too soon but we already have been proposed to expand into other countries. Although we ship our garments worldwide through our online platform, our current market is focused on Europe and America (without leaving out that arab people are always about to make us run out of stock!). We enjoy acting with rigour and quality and that's why we want to grow step by step but yes, indeed, we've got an international expansion strategic plan. You may have noticed that our main social network language is English. 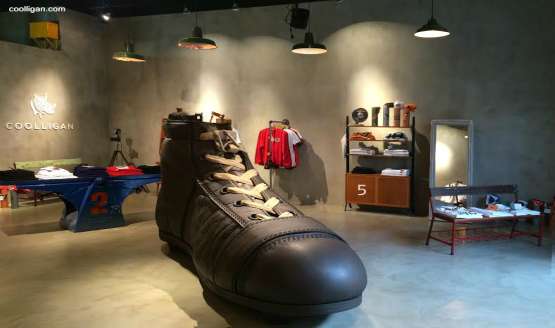