mods Quadrophenia Phil Daniels The Who 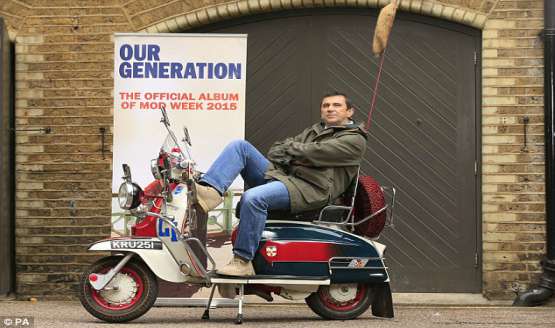 With its 10 mirrors, twin head lamps, leopard skin spare wheel and fox-tail ariel, Daniels is rolling back the years to celebrate Our Generation; a new compilation of Mod classics and talk Quadrophenia.

Probably to younger generations, Daniels is best known as EastEnders' Kevin Wicks or even the Cockney geezer on Blur's Parklife.

However, Quadrophenia's Jimmy Cooper remains his most renowned role so who better to launch Our Generation: 75 Mod Classics - A Way of Life, a new compilation album of classic Mod hits by The Who, Small Faces, The Jam and others? Quadrophenia led to a Mod revival in the late 1970s, giving a new generation a fresh appreciation of the music of that time.

"When I did the film, I was 19," Daniels says. "I was a big fan of The Who and I knew the album Quadrophenia. I liked a lot of soul music, Jimmy Ruffin, people like that."

And what are his memories of such a seminal movie? "All I can remember about the film is working really hard. "We shot it all in six weeks and we did the end first - the first few days were on Beachy Head; it was quite interesting and it's kind of a nice way of doing a film where you do the end first so at least you know where you've got to go with the character and I knew where I had to go with Jimmy."

Watch the video below narrated by Phil Daniels