U2 & NGHFBs at Twickenham | Review 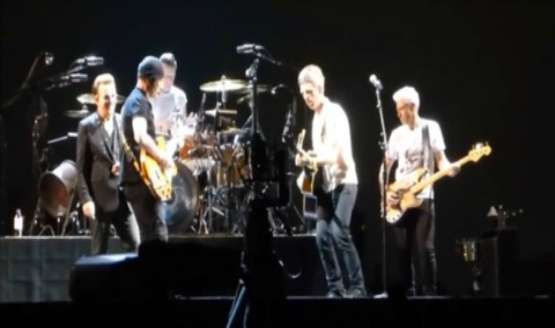 The first of two sell-out nights at London's Twickenham proved to any doubters that after nearly four decades on the road and 30 years since the release of the Joshua Tree, the band remain a live force to be reckoned with. In fact, 'The Joshua Tree Tour' is held in commemoration of this years 30th anniversary of their seminal album.

The band kicked things off in an appropriate fashion with “Sunday Bloody Sunday”. The Irish quartet performed tracks from albums such as 'War' and 'The Unforgettable Fire' and 'The Joshua Tree' in its entirety.

Engaging stage set-ups have been a feature of U2 live shows for a number of tours and with the current set-up including a huge walk-way from the main stage to the middle of Twickenham so that the band were able to adeptly connect with all of their audience.

Going back to U2 concert; classics including ‘Pride’, ‘With or Without You’ and the powerful ‘Where the Streets Have no Name’ warranted those in seats being on their feet for almost the entire performance.

Returning to the main stage for their encore to perform songs such as Miss Sarajevo and Beautiful Day, Bono and his band were joined onstage by former Oasis guitarist to play an acoustic version of the anthemic 'Don't Look Back in Anger' dedicated to the victimes of the Manchester terror attacks.

Guess hard-core U2 fans and Noel Gallagher fans who were at Twickenham last weekend couldn't ask for much more as those anthemic songs the artists are famous for were there in abundance.

Special thanks to Bridin for sorting our press tickets out.