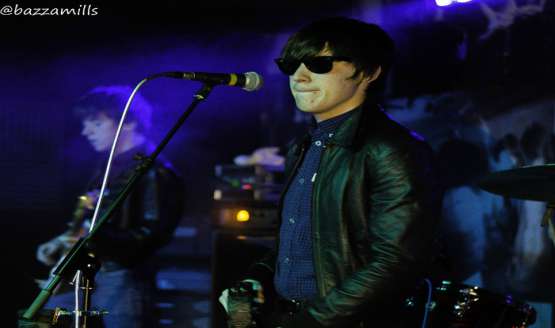 I first heard of The Strypes about 18 months ago on the back of their debut album Snapshot and heard about their live sound being something else with the young lads playing like demons possessed and packing more energy than a quadruple strength viagra. Since then I have been following the lads online and after missing their last tour was determined to get along to one of three Scottish dates on this tour.

Being the final night of their current tour and on the back of two nights at The Caves in Edinburgh I decided to opt for a visit to PJs in Dunfermline in the hope it may end up being one of those end of tour spectaculars. Arriving at the venue, I caught the tail-end of support band The Mighty Steph. Hailing from Dublin and evidently a tight unit themselves The Mighty Stef proved a popular hit with those in the venue early enough and generated a bit of a buzz prior to the arrival on stage of the youngsters from Cavan.

Taking to the stage, The Strypes looked  and sounded impressive and from the opening chords of set opener ‘Now She’s Gone’ it was clear these guys were gonna crank it up like their lives depended on it. Having watched the documentary Best Thing Since Cavan earlier in the year my expectations were uber high going to this one and pleasingly The Strypes absolutely smashed it throughout the duration of their set. With influences from The Kinks to The Who, the appeal of the young band is evidently a wide demographic with the crowd crammed into PJs consisting of screaming young ladies, young lads intent on mirroring their popular look and well slightly older chappies such as myself.

The set appeared to be constantly cruising the troposphere with the lads comfortable performing at this level throughout and taking a few tunes along the way into the stratosphere just for good measure. ‘Get Into It’ was one those tunes and when followed by ‘Scumbag City’ the packed PJs crowd were well into it! For a Tuesday night this was intensity of the enjoyable type with ‘Blue Collar Jane’ being for me the high point of the opening set.

With the crowd pouring out of the sweat drenched room The Strypes returned to the stage and announced that being the last night of the current UK tour it was going to be one of those nights and the night was finally well truly brought to a fitting end with The Mighty Steph joining the band on stage for a high velocity jam and finale covering Jackie Wilson’s ‘Higher And Higher’.

If you have not heard of Irish quartet The Strypes before I suggest you get on it right now and check out these young whipper-snappers as it is just a matter of time before they become massive! That time is coming fast and I expect a forthcoming eruption with the release of their second album Little Victories next month and despite my buzzing ears and rarely buying CDs these days I went straight home and ordered the deluxe edition (hopefully signed). With a return to Glasgow later in the year and an appearance at next month’s T In The Park I am already looking forward to hearing these guys again live. Quality!