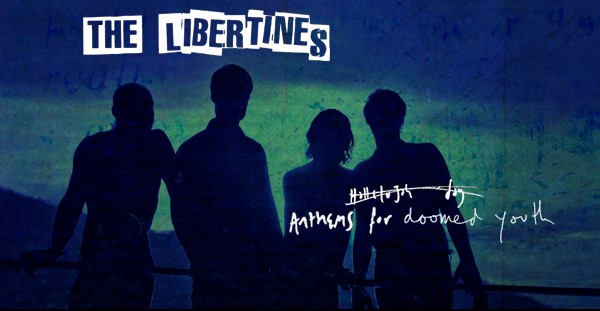 The Libertines – Anthems For Doomed Youth

Despite releasing only two albums to date, The Libertines have continued to intrigue and be one of the most talked about bands of the last decade with many believing a third album would never happen. Produced by Jake Gosling (Ed Sheeran, Paloma Faith) and recorded at Karma Studios in Thailand, Anthems For Doomed Youth is that third album. The title itself instantly raises debate around the need for a band such as The Libertines to ignite the youth and commercial music scene in the UK and finally rid the great British public and chart fuelling nation’s youth of the absolute garbage that has been polluting the commercial airwaves for far far too long!

With much of the historical hype around The Libertines relating to military jackets, (bad) prison tats and the wayward and at times shambolic front-man Pete Doherty and his various addictions the music had better be good. And good it was with 2004’s self titled album propelling the band to the top of the charts giving the nation new found heroes. Alas, it was not to be and despite smashing the singles charts with the terrific ‘Can’t Stand Me Now’ the band succumbed to the pressures of rock n’ roll. Fast forward to June 2015 and the band make a surprise return at Glastonbury before hitting the festival trail throughout the summer. Catching them at T In The Park I was impressed with their set and whilst there was a looseness about their performance, it was real music with an edge to it and one of the definitive highlights of the festival.

So the big question, does the new album live up to the hype?  Opening track ‘Barbarians’ kicks of the 12 track offering and with some hints of The Jam present is a track I am digging with the pub sing-along chorus “All I want is to scream out loud and have it up with the mental crowd” bound to be shouted back at the live shows by their loyal fans. Notably there is a lyric that catches my attention “the world’s fucked but it won’t get me down”, perhaps the band can share their secret as the Tory government appear to be winning too easily in my own little world.

Lead single ‘Gunga Din’ follows and it is a real stormer of a tune with a punky sound that somehow reminds me of The Clash. No doubt, if you’re reading this you will have heard it for yourself…make your own mind up! ‘Fame and Fortune’ is next up and as the track marches on it is laced with numerous influences from the 60s. Ok, so this is nothing ground-breaking but for me personally I would rather be listening to this than most of the other tracks I have heard this year. In contrast, with title track ‘Anthem For Doomed Youth’ I am expecting something mind-blowing, a statement of intent however the track leaves me feeling low as Carl and Pete appear to reflect on their relationship to date.

Pleasingly piano ballad ‘You’re my Waterloo’ raises the bar again with Pete’s stripped-back vocal reminding all just why they have waited so eagerly on the return of The Libertines all this time. ‘Belly Of The Beast’ rolls along with a catchy little riff that get stuck in my head after only a couple of listens. Vocally, it is The Libs at their best with Carl and Pete bouncing off each other and a real album highpoint.

With the sound of waves gently lapping to an acoustic opening, ‘Iceman’ with its accompanying lyrics stinks of The Kinks. Nothing wrong with that in my book and with the track diversifying towards to the end before gently rolling out with the tide it is placed perfecting in the album running order. ‘Heart Of The Matter’ has a reggae feel to it while ‘Fury Of Chonburi’ returns to a punk vibe as Carl and Pete once again trade punches vocally. Slow-burner ‘The Milkman’s Horse’ is a welcome surprise highlighting a somewhat different sound albeit a familiar one (think Radiohead ‘Creep’). ‘Glasgow Coma Scale Blues’ picks up the pace and slaps the listener awake with a bluesy rock feel to it as the guitar tears it up as the album heads towards to final track ‘Dead For Love’. The final track opens with a somber sounding piano before ascending to a crescendo with Carl screaming “and in the shadows you will not talk and there you'll stay until you fall” before the song and album fade to a close.

Should you buy it? Most definitely! Anthems For Doomed Youth is a refreshing update of The Libertines of old, cheeky charm, witty lyrics, big choruses, guitar rock. Is this the start of something new or the end of something previously unfinished? Only time will tell, either way the return of the resurgent Libertines is a welcome return.