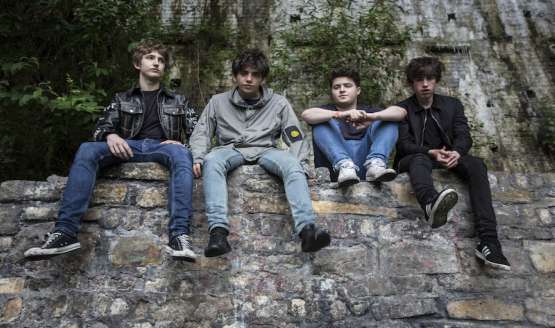 KB: You’ve been gigging for a while now, what’s the gig and the venue you have liked the most so far and why?

PV: Club Quattro in Tokyo has to be our favourite so far. The culture shock was immense and the people were so respectful. The venue was also one of the best sounding we've been at aswell!

KB: When do you think fans will be able to listen to your debut album which is due this year if we are not wrong?
PV: We're hoping that the debut should be out sometime before the end of summer. But we can't see it being any later than the end of the year.

KB: Have you been recording any new songs? and are you working on the title of the new album already?
PV: We've been trying out producers and studios for months now, so we've been recording new songs whenever we can. We have an idea for the Album title but we're keeping it on the down low for now.

KB: When it comes to the songs and especially your lyrics, who writes most of the songs?
PV: For the majority of the songs that we've written so far, Brad comes to us with the basis of the song and we all help put together a finished product and add our own ideas. The lyrics usually come after a song has been complete and we have a certain mood that is being portrayed by the music that we can write too.

KB: These days, the relationship between music and social media(and the internet) has become increasingly important. How do you see this relationship yourself and what's your favourite social media platform?
PV: We are constantly on sites like Twitter and Facebook as it allows us to interact with the fans which we think is one of the most important things a band can do. We always try to answer as many questions the fans have as possible.

KB: Last December, you played Radio X Road Trip with the likes of Johnny Marr and Noel Gallagher, what was it like to be part of that and how did the crowd react to your songs?
PV: Johnny and Noel are massive influences to most of the band and we grew up listening to The Smiths and Oasis, so it was obviously huge for us when we learnt we'd be sharing a stage with them. The crowd were great considering we haven't got much material out there yet so it was nice to see so many people enjoying the music.

KB: 2016 will see The Stone Roses play live again with a series of gigs in Manchester, would you support the Roses at the Etihad in June if you were asked?
PV: Any band would definitely be up for playing with the Stone Roses, especially at a venue as large as the Etihad, so we'd obviously play if we were asked.

KB:Are there any new British acts you are particularly fond of these days?
PV: We're currently enjoying Wolf Alice's debut. We've met with them a few times as well and they're great people.

KB: What advice would you give to fellow bands?
PV: Just enjoy what you're doing and don't play songs to impress people, just play what you want and don't make songs because you think that's what others will buy.

KB: Are you football fans and who do you support?
PV: Elliot and Tom both support Arsenal and Jarvis supports Cardiff City. Brad isn't big on Football though.

KB: We've seen pictures of you and there's quite a lot of adidas going on there. Do you have any favourites? Gazelles, Sambas, Hamburg?
PV: Tough call. It'd probably be between Campus 80's and Sambas though.

KB: Finally, for our followers in Latin America, have you had any gig requests from countries like Argentina, Brasil, Mexico? Would you lke to play there?
PV: We have nothing firm through yet but we'd love to play down that way! We've seen loads of videos of bands playing there and the crowds are some of the best we've seen!

KB: Thank you very much for doing this interview.

Buy their new single, 'Are You Ready For Me?