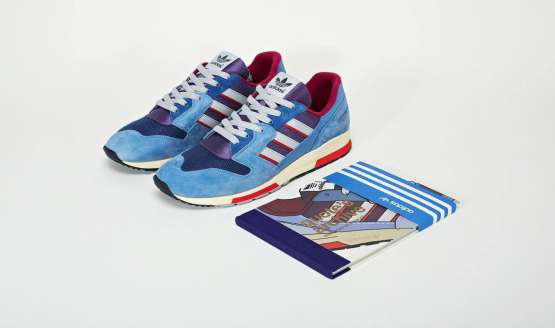 Peter O'Toole is an illustrator from Huddersfield in England. His influences come from decades past, mainly advertising and printing techniques of the 1950's. His clients include Microsoft, Durex, Disney, Activision, Doritos , NME magazine and Adidas. Just recently he became a regular illustrator for one of the most iconic brands in the world "adidas". He was even given the chance to design and endorse his own trainers.

Read our exclusive interview with one of Britain's finest designers these days.

KUL BRITANIA: Hi Peter It's been a year almost since we last spoke with you and it seems a lot has happened since then. Did you think things would change so much in just over a year?

PETER O'TOOLE: It's gone quick since we last spoke! You never know whats around the corner in the illustration game, it's not a journey you can plan, you just go wherever the river takes you! but to answer your question I couldn’t have imagined, I’m a father now, and a regular illustrator for adidas, it's fantastic.

KB: About your work, What kind of design projects are you most interested in these days ?

PO: I like the variation of projects, I’m always up for something that I haven’t done before, for instance I have never designed a skateboard, so I’m looking into avenues of making this happen, I’ve done a wide variation of stuff. When I was at college illustrators were people who drew children books and did illustrations in newspapers and that was about it! Ive designed clothing, beermats, window displays, beer bottles, food packaging, done editorial illustrations, web stuff, tutorials, trainers, it's crazy! in fact editorial is something I'd like to delve more into also! 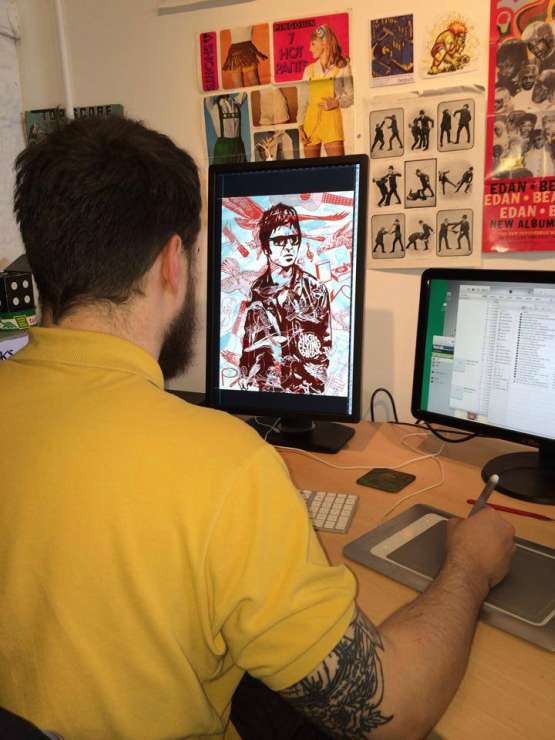 KB: What do you consider to be your most successful design project so far and why?

PO: It's got to be the adidas book and show. Just because I remember coming up with the idea like it was yesterday, I remember saying I was going to ask quote to pitch it, and he did, and everything went like clockwork from there. In the space of about a year and a half my idea had come to light and I was one of the few people in the world who has his face on an adidas shoe, it's unbelievable. Imagine if i had never acted on it initially?

KB: Can you expand a little on that Peter and tell us what it was like to design your own adidas trainers?

PO: It was really surreal. I got flown out to Germany more than once all expenses paid and treated like a king. I had the rare opportunity to visit the archive for a full day for a photoshoot with sneakers magazine and then we were in numerous publications because of it. We had a launch party thrown for us at no 74 with my face on the door 3 foot high and a set (in the style of an old German bar) built in-store just for us. It was crazy. A film crew from U-DOX came to film us in my studio and Quotes flat respectively and made videos that were seen by hundreds of thousands of people. You can only imagine the high that gets you. Not to mention the legitimacy of having a project like that in your portfolio. It's legacy stuff!

KB: You've recently done work for the new adidas island series as well designing postcards, adverts, etc? Where did the inspiration for the project come from?

PO: The island series stuff I’ve done (tahiti, hawaii and samoa) is based on old postcards. (There's some more coming too)  I’ve always been into vintage stuff, my style is based on printed illustration from the 50s. So it's always something I look too. I actively buy and keep a studio archive of all sorts of vintage ephemera. Its a great reference point and snapshot of a time long gone. 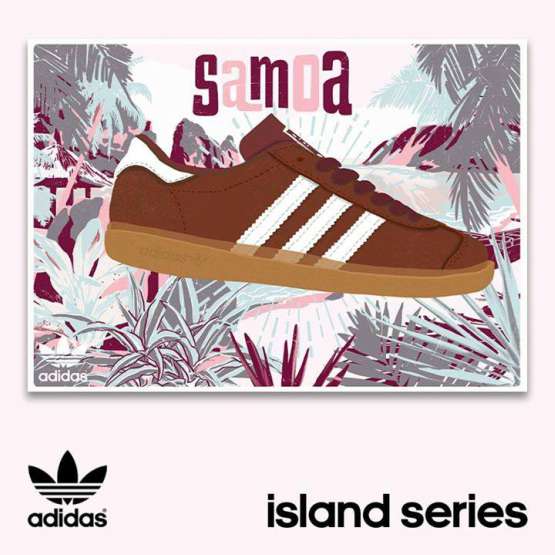 KB: Speaking of adidas, former Oasis Noel Galagher and huge adidas fan once said "Love is lending your best trainers" do you agree with him?

PO: Ha! I don’t think I'd lend anyone my trainers! I don’t love anyone that much, except my wife, and she’s not my size!

KB: What was the last pair of adidas you bought? and how many pairs have you got?

PO: I grabbed the tahiti and hawaii last! I don’t have a great deal to be honest, nothing compared to quote. I have had and sold many in my past which has given me a good education to work for adidas. Everything happens for a reason!

KB: Regarding your work as a designer, do the current trends tend to influence your work?

PO: Nah not really! I don’t follow trends, I’m thinking long term and I don’t want to be pigeon holed and forgotten about in three years time. I think you need to evolve with the times, sure, but carve your own path. Trends always go out of fashion. I want to be timeless.

KB: What's a typical day like in the life of Peter Otoole? You are a freelancer, aren't you? Does that give you a lot of freedom to manage your time and create new stuff?

PO: Maybe in the early days when I didn’t have any clients! But nowadays it doesn’t seem like that. I have built up a solid list of clients and most come back for regular work so it always seems to be ticking over. I sell prints on the side too and also have the studiotoole portrait service so everything together takes up most of my time. If I have the odd quite week I'll have a list of personal projects I'll want to reel off so ill get stuck into them! 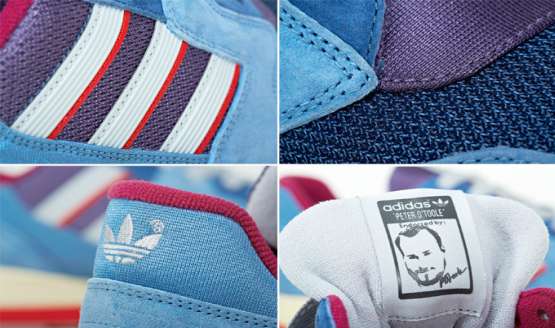 KB: You recently joined forces with legendary designer Brian Cannon? Can you explain to us what the collaboration consisted of? And did it come up to your expectations?

PO: Brian's a perfectionist so I had to be on the ball when thinking up an idea for the project.  And of course the execution had to be there too. Brian was over the moon with what I did (my interpretation of Microdots last 25 years) so that was a relief! I wanted to have a piece of art that not only celebrated his obvious asis/verve stuff but also celebrated the before and after too! he’s done so much more and I wanted people to realise that. 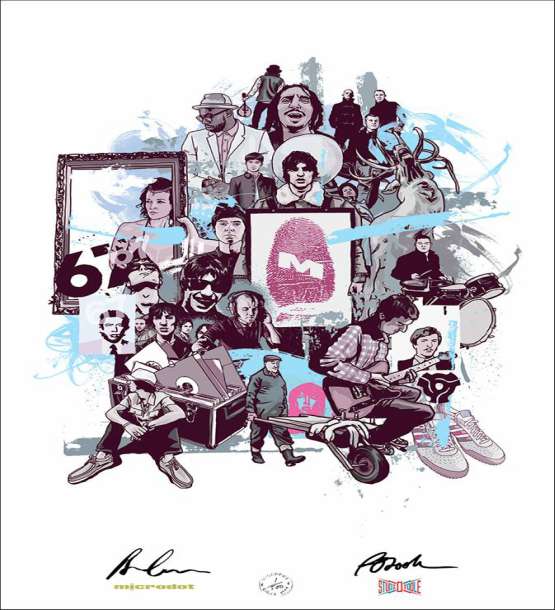 KB: Speaking of Cannon, you were at his studio in Wigan and at the exhibition I guess, big Oasis, Verve fan yourself? Did those bands play a big part in your life?

PO: For sure, especially been from the north of england. Every kid of my generation wanted to be like one of them at some point! They were accessible. They came from similar backgrounds so automatically we can relate to them.

KB: What's next for Peter O'Toole? What are you working on at the moment?

PO: I’m currently finishing up the front cover for the daily telegraph sports magazine thats out in two days and also some more adidas work. my project with clarks is launching at the end of the month too so i can’t wait for that!

KB: Finally, If we could go back in time and we met little Peter , what advice would you give him?

PO: Don’t worry about getting big clients and getting big jobs. Just work hard and do what you do and all of these things will come organically! Patience is a virtue!

Digital downloads or vinyls?
Both for different reasons. one for the aesthetic, one fir the convenience

Vespa or Lambretta?
I’m not clued up on scooters but vespa

Thank you very much for your time Peter.