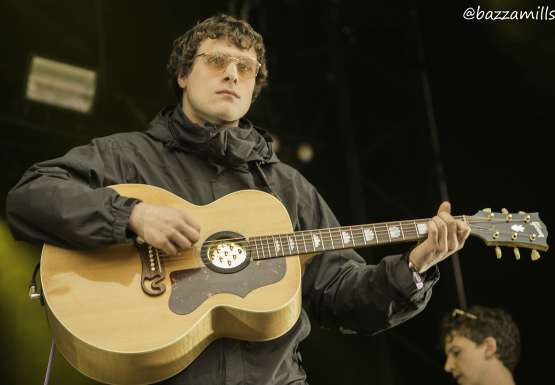 Having made waves with the release of their debut Hills End, Sydney trio DMA’s have built up something of a following in the UK through extensive touring, blistering festival performances and word-of-mouth amongst the sub-cultures and ‘youngins’ in the know. Even Rkid, Liam Gallagher, is a fan and the Aussie lads will be supporting him at his Finsbury Park gig this summer. Eagerly anticipated second album For Now has now arrived and with many dates on the UK tour already sold-out it this could be the album that propels DMA’s into the mainstream.

Produced by the band alongside Kim Moyes (The Presets) the album is packed full of infectious, emotive songs with an uplifting freshness reminiscent of the timeless indie anthems of the past.  Title track ‘For Now’ kicks the album off and wastes no time reminding fans of their debut exactly what they love about this band. That said the production has shifted up a gear and the sound has evolved in a natural credible way. First single ‘Dawning’ follows and immediately hooks the listener with singer Tommy O’Dell’s vocal alongside contagious guitar hooks.

Comparisons to the Roses and Oasis have been widespread but the DMA’s appear to be evolving and shaping their own identity.  ‘Time and Money’ and second single ‘In The Air’ are testament to this with a more laid-back, chilled-out vibe.  Vocally O’Dell highlights his versatility delivering a more soulful vocal in an effortless convincing manner. ‘The End’ highlights the move towards synths and electronic production whilst maintaining an edge that intrigues and ensures the listener remains captivated. ‘Warsaw’ and ‘Lazy Love’ are two stand-out tracks infused with Britpop influences that seem destined to become live highlights over the course of the album tour and summer.

The stripped back harmonies on ‘Health’ add some further variation whilst melodic closer ‘Emily Whyte’ shines with O’Dell’s spine-tingling vocal alongside the guitar proving a fitting ending to the album. Interviewing Mason from the band last year he hinted at a different more progressive sound moving forward and For Now has delivered exactly that.