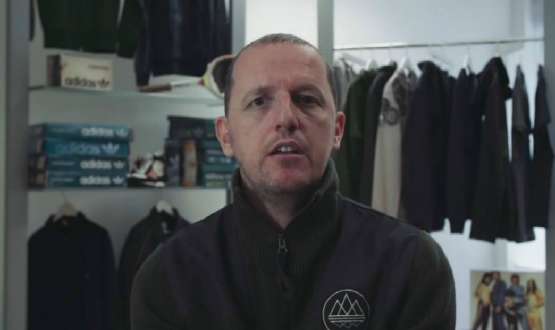 Read below our exclusive interview with brand expert, creative consultant and Adidas Spezial curator Gary Aspden. Gary talks about his first Adidas trainers, his work for Adidas, the adidas Spezial exhibiton, his friendship with Stone Roses frontman Ian Brown and his future plans.

KUL BRITANIA: CAN YOU TELL OUR FOLLOWERS WHO YOU ARE AND WHERE YOU FROM?

GARY ASPDEN: My name is Gary Aspden, I was born and grew up in a town called Darwen near Blackburn (25 miles north of Manchester). I have lived in London since the late 90s and have worked with adidas for over 16 years.

KB: DO YOU REMEMBER WHEN AND WHERE YOU BOUGHT YOUR FIRST ADIDAS TRAINERS?

GA: My mum bought me some adidas Beckenbauer Super football boots and a pair of adidas Kick around 1978.

KB:. GARY WHEN AND WHY DID YOU COME UP WITH THE IDEA OF THE ADIDAS SPEZIAL EXHIBITION?

GA: I am a UK8.5 which is adidas sample size so I had kept shoes from projects I had worked on over the years. Some of the bands I worked with (particularly the ones from Manchester) in the years I worked on Entertainment Promotions wanted rare vintage styles so I would try and source them on my travels. I would give them as gifts along with our inline products. I kept a few pairs for myself along the way too. After a few years I had as a consequence amassed quite a collection without actually setting out to be a collector if you know what I mean.

I felt that athletic footwear (particularly adidas) had strong cultural associations and that it would be interesting to present a selection of it in a gallery environment. I needed to be a one brand exhibition as the topic of athletic footwear would be way too broad otherwise. We approached a couple of galleries in the north of England around 2007 but let's just say that they didn't share my vision. I spoke to a couple of other people with adidas collections (Noel Gallagher, Robert Brooks, etc) and eventually put together the first SPEZIAL showcase in London's Hoxton Gallery in July 2013. The response was overwhelming. It was great to see kids coming to see it who had never set foot in a gallery before and opening their minds to being in a new environment . The only criticism we received from adidas fans was that it should have been in the north as that is where adidas has always been the most popular. Just over a year later we brought a bigger and better version to Manchester to serve as the launchpad for the adidas Originals x SPEZIAL capsule clothing and footwear collection that I had been working on.

KB: HOW IMPORTANT GARY WAS AND IS ADIDAS TO BRITISH STREET CULTURE AND THE CASUAL MOVEMENT FOR INSTANCE?

GA: Adidas has a far bigger following in the north of the UK than London. adidas is intrinsic to the way people dress there - their styling is their own and isn't born out of skate or Hip Hop culture. They aren't trying to replicate that American street wear look which I find refreshing as things become steadily more homogenised globally.