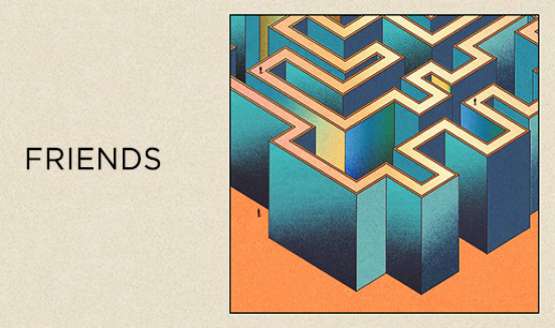 White Lies have revealed another taster track titled ‘Come On’ from their fourth album 'Friends' due October 7th.

After three consecutive Top 5 albums, this is the first release under a new deal with BMG. First single from the album ‘Take It Out On Me’ was well received by media and fans alike and follow up track ‘Come On’ showcases another taste of what the highly anticipated new album has to offer. ‘Come On’ is a well-crafted emotive song that opens with a sparse electro-fueled verse, culminating into a beautiful crescendo of big bold guitars & heart wrenching strings while McVeigh's vocals rise up to a melodic euphoria.

Says White Lies’ Charles Cave of the song; “'Come On' was a late addition to the album, and we had made multiple demos of it, but until we tore it to pieces and put them together again, it had stayed in our back pocket. We couldn't be more pleased with how it turned out, and feel it's set to be a real live favorite. It's a song about when any noise feels too loud, and any quiet feels too unnerving; when there's things that need to be said that have been bothering you, but you're not sure you'll ever be ready to say them”.

The ten-track album will be released on CD, vinyl, picture disc, digital download and streaming formats, as well as a special box set edition which will include a cassette and four exclusive bonus tracks. Pre-orders are now open at all retailers including White Lies’ official store, iTunes and Amazon where ‘Take It Out On Me’ and ‘Come On’ are available as immediate downloads.

White Lies - completed by drummer Jack Brown – are also embarking on an extensive UK and European tour which stretches from mid Octoberthrough to the start of December. It includes a major homecoming show at London’s O2 Shepherd’s Bush Empire on November 22nd.

You can listen to the track HERE