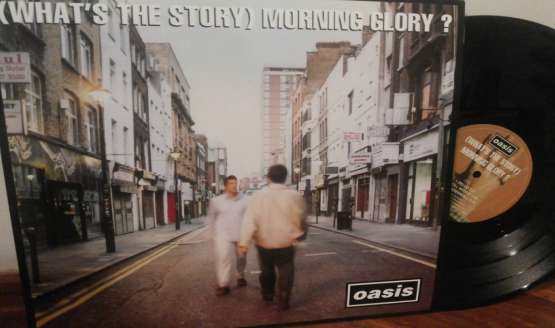 It was reported the day after its release HMV stores were selling copies of the album at a rate of two per minute. At the end of the first week of sales, the album had sold a record-breaking 347,000 copies, making it (at the time) the second-fastest-selling album in British history,
'(What's The Story) Morning Glory?' has so far sold more than 20 million copies worldwide - 4.2 just in the UK - and featured the band's first number one single 'Some Might Say'.

Six singles were taken from What's the Story Morning Glory?

"Some Might Say", "Roll with It", "Morning Glory", "Wonderwall", "Don't Look Back in Anger", "Champagne Supernova"

The album was voted the 'Best Album Of The Past 30 Years' at the Brit Awards. In 1996, the band headlined Knebworth Park selling out 125,000 tickets in just 4 hours for the first night ... the rest is history.

Where were you while they were getting high? How old were you then? What do you remember about those days? Favourite track off the album? Leave your comments below.