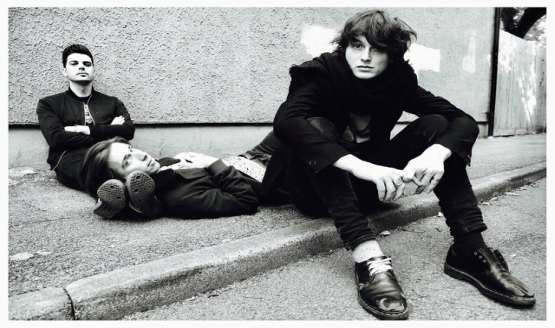 Trampolene! A ripper of a name for this Welsh trio who exhale energetic rock that will make you want to jump up and down and leave you panting for more. After two years of continuous touring, October 27th will see the trio consisting of Jack Jones (vocals/guitar), Wayne Thomas (bass/vocals) and Rob Steele (drums/vocals) release their debut album, Swansea To Hornsey.

Recorded at Ray Davies’ Konk Studios, Swansea To Hornsey is something of an awakening with the poetry tracks adding variation and depth to an album that resonates lyrically as the music hits the senses like shot of adrenaline. Spoken track ‘Artwork Of Youth’ opens the album as Jack Jones reflects on his early life first experiences “Alicia Pitson was the first girl I ever fancied, Jamie Morrison was the first boy I ever fancied”. Attention demanding,  the poetry is brilliant, humorous and captivating and reminds me instantly of a poetry book I bought many years ago at a Kelly Jones (Stereophonics) gig written by the support act, who was brilliant and way ahead of his time, a Welsh guy by the name of Davey Crockett. ‘Imagine Something Yesterday’ follows with loud, brash guitars erupting before the melodic chorus kicks in and slows down the pulsating pace “it’s not who I am, it’s who I’m going be”. There is no two, three listens required, this is impressive stuff from the off and with previous single ‘Alcohol Kiss’ and ‘Dreams So Rich, Life So Poor’ following the guitar hooks completely consume the listener.

‘Gangway’ is well placed and highlights a gentler side to the band before the second piece of poetry, ‘Ketamine’….”can make you light-headed, your pencil unleaded, your mind may be fine but your bladder is shredded”. Witty and thought provoking, the album then takes a different turn with the terrific ‘You Do Nothing For Me’ emitting laser beams from the guitar amps. 'Primrose Hill’, ‘The Boy That Life Forgot’ and ‘Storm Heaven’ are stand-outs but in truth it is very much a case of one winner followed by another as the band takes the listener on a euphoric journey as they flirt with a plethora of musical styles. Make no mistake, this is a an album that reeks of a raw talent, the type that comes from deep down in the bile of the ones belly and the final spoken word and album closer ‘Pound Land’ is testament of this.

Trampolene are supporting the rejuvenated Liam Gallagher on a number of his arena shows and if you’re lucky enough to have tickets, Trampoleneare a band that will have you bouncing very VERY high!

Pre-order their debut album via https://www.pledgemusic.com/projects/trampolene-swansea-to-hornsey