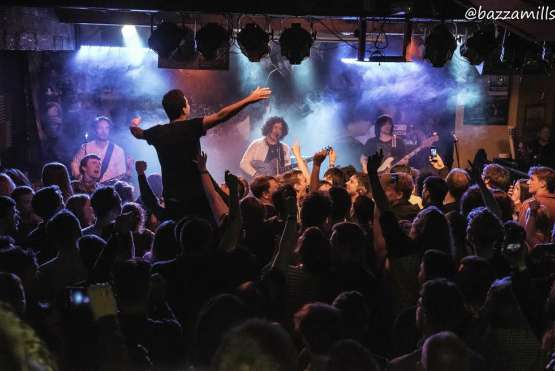 It’s been 15 years since The View emerged with the raucous rock ‘n’ roll rush of their debut album ‘Hats Off To The Buskers’. Mixing ragged indie-rock anthems with frontman Kyle Falconer’s flair for observational lyricism, the album became one of the biggest hits of the year. It went straight to #1 on the UK’s Official Album Chart, reaching Platinum status in recognition of 300,000+ sales. It also earned a Mercury Prize nomination, and prompted NME to draw glowing comparisons with classic bands stretching from The Stooges to The Libertines.

Now The View will reunite to play their first show in more than five years when they hit the O2 Academy Glasgow on December 16th, featuring the core of the band’s classic line-up: Kyle Falconer (vocals/guitar), Kieran Webster (bass/vocals) and Pete Reilly (guitar). Tickets for the shows will go on general sale from www.gigsinscotland.com and www.ticketmaster.co.uk from Friday.

The show comes ahead of The View’s bigger plans for 2023, which includes the release of a brand new studio album on Cooking Vinyl. It was recorded in Granada with the Grammy Award winner Youth (The Verve, The Charlatans).

Kyle Falconer says, “It’s an honour to still be able to play our songs to audiences who love them. The View are probably in the best position they have ever been to play live. Taking some time to refocus has given us all the drive and the hunger to release more hits and blow everyone away again. It’s gonna happen so we hope you’re ready. We are!”

‘Hats Off To Buskers’ also took The View into the singles charts with the #3 smash and instant indie classic ‘Same Jeans’ plus the Top 20hits ‘Wasted Little DJs’ and ‘Superstar Tradesman’. Two of their subsequent four albums - ‘Which Bitch?’ and ‘Cheeky For A Reason’ - also reached the Top 10, while their previous set, ‘Ropewalk’, was produced by Albert Hammond Jr. of The Strokes.

The View also released the ‘Seven Year Setlist’ compilation, which featured numerous other live staples and fan favourites such as ‘Grace’, ‘5 Rebbecca’s’, ‘Shock Horror’ and ‘How Long’. They departed in 2017 by playing a sold-out homecoming show at Dundee’s Caird Hall. The Courier’s review prophetically concluded, “The View were on fire! But will they be back? Of course they will.” And now they’re ready to relight a flame that once burned so bright.

For more information please contact This email address is being protected from spambots. You need JavaScript enabled to view it.