The Verve's Nick McCabe on Urban Hymns, working with LG and Oasis getting back together 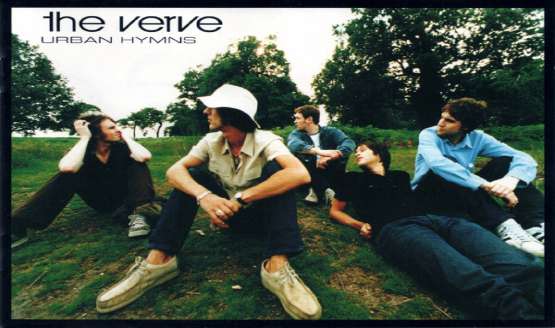 In an interview with NME, Nick McCabe has spoken about 20 years of ‘Urban Hymns’, competing with Oasis, working with Liam Gallagher, the state of guitar music, and whether the band could ever reunite.

This week sees the band celebrate the release of the 20th anniversary edition of their seminal album ‘Urban Hymns‘, and McCabe is full of fond memories of the band at their peak.

“I’d come out of a relationship a year before,” McCabe told NME, looking back at 1997. “After I got sacked from The Verve, a couple months later my ex ditched me as well. So I thought I’d better get on with having a good time and I made a point of doing that. So 1997 was probably the start of my bad behaviour and I did have a lot of fun on it.”
“I think anyone who follows us knows that we’re inconsistent. When we were good we were on fire. Even when we were bad, there was still a spark of negative energy to it. Somehow everything just floated together perfectly and that’s one of those times – there’s so many of those.”

Then, McCbe talked about working with Liam Gallagher back in the day during the recording of Urban Hymns and he said: "“It wasn’t like working with anybody really – he just turned up at the studio and the next thing we’re playing and he’s in a booth next to us singing.  One of the things that is often forgotten about Oasis, particularly in those days, is that it was really in their blood. My other half is a tour manager and worked around them for years and years and said wherever they were they had a guitar in their hand – any time of day. I think that was one of the things, apart from going out and getting wrecked, that we were both on a similar trajectory for, in that we were dead serious about music. I can’t vouch for them in later days because our paths have obviously diverged. It’s weird to talk about it now but it was one of those situations that was like, ‘Oh! Nice! Liam’s singing on this’.”

Finally, on whether Oasis would reform or not, McCabe told NME:“I think it’s a matter of time. They’d be stupid not to. I get the feeling sometimes that they’re just playing. It’s like mischief.

“They know that it is on the cards eventually and they’re having a bit of fun with it. But you know I’m wrong about most things.”

More on The Verve 'Urban Hymns'

The Verve Urban Hymns is out now.