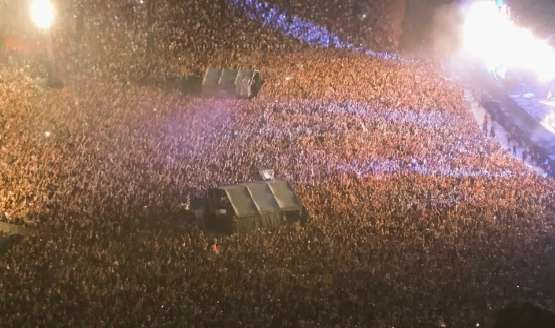 For the past 23 years The Stone Roses have basically been inactive...sadly. That was until their most recent releases of 'All For One' (2016) and 'Beautiful Thing' (2016),which resulted in one of the most iconic bands of the 90s to tour once again.

​After their successful gigs at The Etihad in Manchester, The Stone Roses were made to add extra dates to their tour through popular demand, giving them their spark, mojo and energy that has been hidden for over 20 years. For one night only they blessed London with their presence at Wembley Stadium on the 17th June 2017 - not playing in London for more than 4 years. 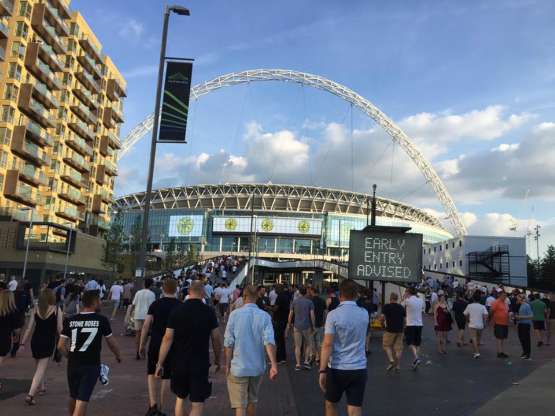 Wembley itself is one of the most immense locations in the South East of the UK, holding both sporting and musical events; allowing up to 90,000 people to come together. Although some may refer smaller gig venues, like KOKO in Camden, which are intimate. Yet the sheer size of Wembley allowed more people to come together, the old and the young, and appreciate the music, open friendliness and one love.

​Obviously everyone was their to witness The Stone Roses comeback, so throughout the opening acts (Blossoms, Sleaford Mods and The G-O-D, who were, bluntly, slightly disappointing) everyone was enjoying the variations of food and, mainly, drink within the area.

​"Lucky enough to have seen them in small gigs at the start. Blackpool then Spike Island, Heaton park Etihad and Dublin too. Last night was by far the best bar spike island, and that only because of what it was. Magical night, truly amazing experience!" - Alex, Warrington 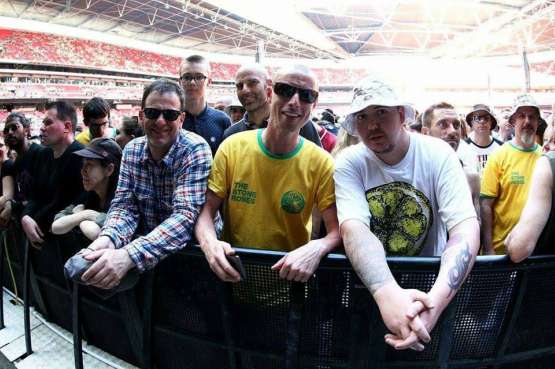 The anticipation was high. Everyone was ready to experience the spiritual revelation of The Stone Roses.

​As a 16 year old I haven't been able to experience many gigs, yet that night at Wembley cannot b compared to any other gig of any other band. The once-in-a-lifetime experince is all thanks to the fans, spreading one love. The power of everyone screaming the lyrics from the top of their lungs, people of all ages, to every song is something I will never forget From OAPs to teenagers, and from children to adults; nearly every single person was wearing their bucket hat with pride.

​"I was at Wembley with my daughter. It was a joint 18th Birthday and Fathers Day present. If I said she was blown away by the atmosphere, the music, the flares and the open friendliness of the crowd I would be underestimating it. What I was pleased with was the amount of young people that most probably weren't even born when the Roses started, singing along and knowing all the lyrics. I'm 55 and was still not the eldest there." - Russell Taylor, 55

It's little things like this which make the atmosphere so intimate and legendary; even so that some have compared it to the Roses' acclaimed Spike Island gig in 1990. 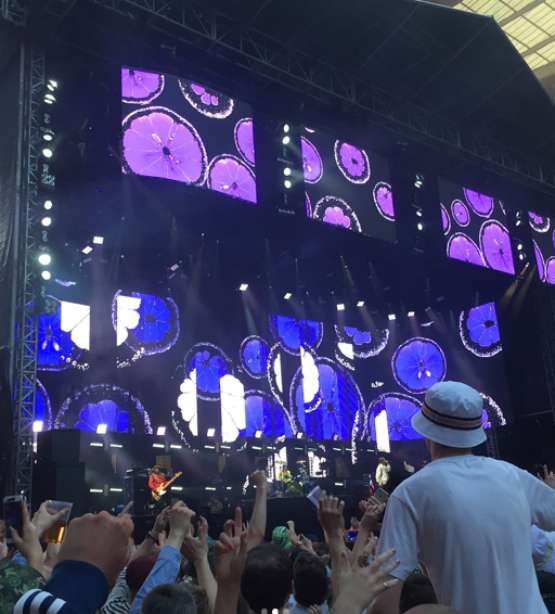 It was electric, it was biblical, it was the best night of my life.

​As all four members walked onto the stage the crowd roared. Opening their first song, 'I Wanna Be Adored', with a rhythmic drum solo, taken from the introduction of 'Stoned Love', by Reni really charged everyone up with energy - the whole stadium was electric. As the base kicked in, thanks to bassist Gary "Mani" Mounfield, everyone knew that it was a night they would never forget.

"Absolutely smashed it last night however I've seen them at Heaton park, Finsbury Park, Etihad and now Wembley, just hope they release something new before they become.....dare I say it, predictable / boring" - Scott, 44, Leeds

Although it is a rare occasion for The Stone Roses to change their set list, it never gets boring. Those who have seen The Stone Roses many times before haven't complained about the lack of change - each song is unique; no matter what order they go in, each gig is amazing.

Personally, the best song throughout the whole concert was Fools Gold. C'mon, it's a classic. I have waited many years to hear that song live and I was not disappointed. Everyone was arm in arm, swaying and singing to the music. Some singing the lyrics, and most shouting the tune with "do's" and "dahs".

"I've been waiting since 1989 to see them. The band that changed / influenced my life. Really emotional for me. They were amazing. The wait was well worth it" - Sue Wallace, Ruislip, 45

​Indeed, the band’s first and self-titled album made up most of the band’s set-list. A small handful of songs from their “difficult second album” make it to the set as well as a handful of early singles like ‘Sally Cinnamon’ and last year’s new single ‘All For One’, which admittedly seemed like a breath of fresh air for everyone.

​Ending the night with 'I Am The Resurrection' manifests that the gig, throughout, was filled with sing-along anthems and an enormous blast from the past.​ Although, before the gig, London had experienced a number of fatal tragedies, The Stone Roses definitely brought some positivity and love with them, spreading it around the stadium and the rest of London.

​"First time I've seen them, was near the front and was mind blowingly incredible, so many young people, though most of them only knew half the songs so felt a bit awkward breaking into heaven where angels play love spreads etc... but they were in great form and john was absolutely shredding it" - Aidan, 17

​The Manchester formed band have done it again and knocked the socks off of everyone. All I can say, on behalf of everyone, is well done; and thank you for one of the best gigs in rock history. This Is The One.

Setlist:
I Wanna Be Adored
Elephant Stone
Sally Cinnamon
Mersey Paradise
(Song for My) Sugar Spun Sister
Where Angels Play
Shoot You Down
Waterfall
Don't Stop
Begging You
Elizabeth My Dear
Fools Gold
All for One
Love Spreads
Made of Stone
She Bangs The Drums
Breaking Into Heaven
This Is the One
I Am The Resurrection