The Stone Roses to play Japan ahead of UK tour dates

Via John Robb's website, excellent louderthanwar we learnt the Roses will apparently play Japan before the UK.

Creativeman Production, one of Japan’s biggest and most esteemed promoters, announced on 1 December 2015 that The Stone Roses will play Japan Budokan in Tokyo on 2 June 2016.

Creativeman’s dedicated The Stone Roses page details the sell-out dates at Etihad and the additional dates added, speculates about new material and promises ticket information at a later date.

Japan’s Budokan indoor arena is located in the Chiyoda Ward of central Tokyo and has a 20,000 capacity and has played host for many Live at The Budokan albums .W'llseeif that gig is recorded then. 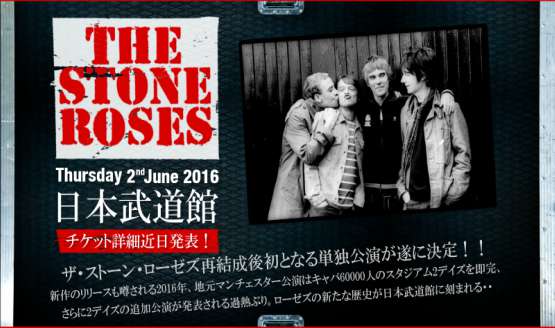