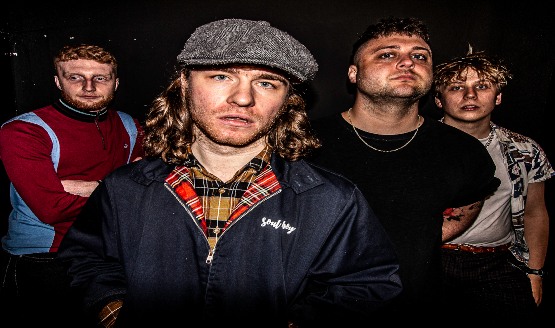 Championed by This Feeling and Scotts and fronted by Zac Skinner, The Skinner Brothers are quickly establishing themselves as Kulbritania favourites and providing the post pandemic spark to get everyone buzzing again.

Soul Boy II is the album we’ve been waiting for and contains all the belters from their previous EP and more. ‘Mountain High’ kicks off proceedings at a frantic pace, a fist-pumping anthem grabbing the listener from the off and previous single ‘Put Me Down as a Maybe’ follows with an infectious groove alongside Skinner’s swagger-esq vocal. There’s a fresh energy resonating as Skinner delivers each lyric.

The hypnotic ‘M.O.R.E’ builds into a rousing anthem as Skinner blasts out “give me more love, give me more life…give me one more reason I should give a f**k” whilst ‘Low’ is a 70s influenced charged-up foot stomper lyrically documenting the weekly journey of the weekend high and then the “low, low, low”.  Mid-album, a stripped back acoustic version of previous banger ‘Away Days’ slows down the pace somewhat. Featuring Russ Pritchard (NGHFB) on bass and backing vocals, the chilled-out version works well before the energy levels go up a notch once again.

While Soul Boy II was mostly written, recorded and produced by Zac, The Skinner Brothers are actually a four-piece consisting also of Joe Fisher (guitar), Perry Meadowcroft (bass) and Alfie Clayton (drums). ‘1000 Reasons Why’ and ‘I Told You So’ highlight the variation of material on offer and with the catchy guitars have a summer vibe that will ignite the crowd bounce as the Skinners blast from those festival speakers in the months and years ahead.

‘Give It All To Me’ is another soaring anthem and is followed by the mesmerizing and explosive former single ‘Iconic’. Make no mistake, ‘Iconic’ hits hard and emits a gripping energy from the off. The powerful video adds to the track, as a bare-chested Skinner runs flat out on a country road it’s like a wake-up call for the 2022 youth culture disenchanted by the mainstream offerings; a new leader has arrived, get on it!

Next single ‘Stupid Much’ features a nice riff and seems destined to be a key part of the Skinner Brothers story. Holding back the track since the start of lock-down, front man Zac informs “I wanted Mike Skinner to do a verse and contacted his Manager, Tim Vigon, only to be informed Mike doesn’t really do that but I really like the track” . The upshot was Tim ended up managing the band! If the band needed any endorsing this was it and the Skinners story has continued to gather momentum since.

‘Way Too Far” continues to elate and showcases a softer side to the band. Throughout the album, the beats, riffs and hooks grab the listener and Skinner’s lyrics are palpable, connect and are well worked into each track “life can be a bummer, but you’ve got to just smile” and “find me by the juke-box, I’ve been here since 21, playing killer on the table”.

Soul Boy II is an eclectic collection with a number of super-charged bangers ready to burst out. It sounds cliché, but Skinner has put the graft in and the hard work is about to pay off!

Catch the band on their UK tour next month before the gatherings multiply in size.

Tickets for their tour available here.

Watch their video for Iconic below