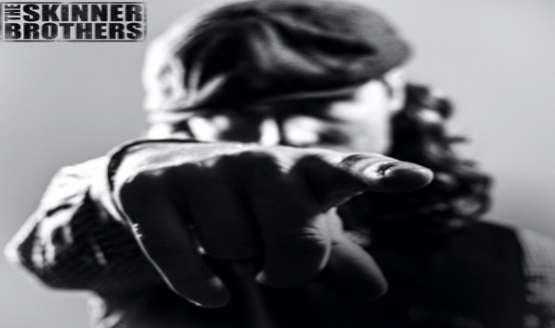 This summer has seen The Skinner Brothers begin to earn the attention that their anthemic rock ‘n’ roll rambunctiousness deserves. Currently embarking upon a major 17-date sold-out tour as special guests to Kasabian, building on a recent rush of activity that has also included two outdoor shows with The Streets, a set at the Neighbourhood Weekender, and two sold-out headline gigs at London’s 100 Club.

Their recent EP ‘Culture Non-Stop’ proved that they’ve got the songs to match their burgeoning reputation. And now their irresistible run of form continues as they release their brand new single ‘Put Me Down As A Maybe’.

Again produced by frontman and songwriter Zac Skinner at his home studio in Brentford, ‘Put Me Down As A Maybe’ proves that The Skinner Brothers are clear-cut contenders as a new era of essential British guitar music emerges. The band has fed their own personality in a track that puts a fresh angle on a larger-than-life hybrid of Kasabian’s psychedelic strut with bursts of ‘Love Spreads’-era John Squire guitar intensity. The song was then mixed by the Grammy-nominated James Krausse.

Zac says, “We’re trying to keep it moving right now, new songs coming, more gigs - buzzing to be on tour with a band like Kasabian and get out there and spread our music to a new crowd. ‘Put Me Down As A Maybe’ is a straight up banger for the heads.”

One of The Skinner Brothers’ earliest opportunities came when Carl Barât invited them to tour with The Libertines, while their underground following swelled with the support of new music champions This Feeling. Prior to that, The Skinner Brothers were run by Zac as an entirely independent DIY project. The band’s line-up is completed by Joe Fisher (guitar), Perry Meadowcroft (bass) and Alfie Clayton (drums).

Already confirmed to join The Music’s huge reunion show in Leeds next May, The Skinner Brothers have announced a huge UK Tour for March 2022