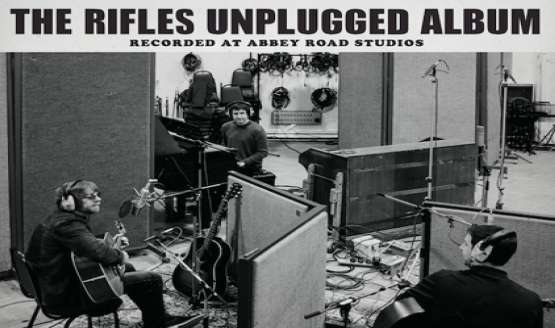 Fans of The Rifles will love this unplugged album recorded at the historic Abbey Road Studios. Released on Cooking Vinyl the album showcases tracks from The Rifles five album back-catalogue and was recorded in just one take day in January 2017.

Opening with ‘The General’ from the Great Escape album, the stripped back vocals instantly shine alongside the accompanying strings. With Joel Stoker and Luke Crowther accompanied in the studio by Dean Mumford on keys along with a string quartet it provides the perfect platform for tracks including ‘Local Boy’, ‘The Great Escape’ and ‘Spend a Lifetime’ to connect lyrically in a manner that was perhaps missed in the original recordings.

The uplifting ‘Rock The Boat’ is an early standout with rays of sunshine penetrating the airwaves as Stoker sings “play me a classic, play me one of those that just don't get old, one from the past yeah, not like the ones that we hear today on the radio…beautiful music”, indeed it is! Another that resonates is ‘Tangled Up in Love’ with the stripped back string-laden version that guaranteed to raise the hairs on the back of your neck.

Arguably some listeners may find tracks such a ‘Minute Mile’ lack the punch of the full band versions and being an unplugged album with 16 tracks on offer there is a danger of things pittering along. Pleasingly the addition of a 30 piece fan choir for the last three songs ensure any ideas of this are kicked into touch and by the time the choir joins the keys on ‘Coming Home’ it literally feels like The Rifles are performing an intimate gig just for you.  Stunning versions of ‘Romeo & Julie’ and the spiritually enlightening ‘Under & Over’ close the album out and leave the listener wondering how such magic was captured in just one take. It’s Abbey Road of course and there is a history of some special things happening here and The Rifles just created their own little bit of the special stuff.

Still not convinced…the album also features new track ‘In Key’ and as the spring sunshine pierces the clouds the track exhales resilience perhaps reflective of The Rifles as a collective. With the band heading out on the road next month for an unplugged tour I am thinking to myself these songs will be even better delivered live. See you there!

The Rifles head back out on tour in May & June. Tickets can be purchased here; http://www.therifles.me.uk/ See full tour dates HERE.