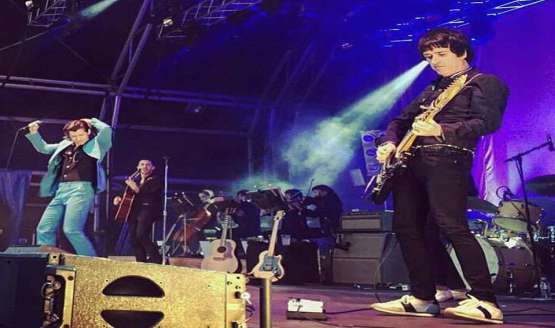 The Last Shadow Puppets, the band cofronted by Alex Turner and Miles Kane, performed at Castlefield Bowl in Manchester (July 10) and did a cover of The Smiths featuring former Smiths guitarist,Johnny Marr.

The track, 'Last Night I Dreamt That Somebody Loved Me', is taken from Strangeways Here We Come the Smiths last album released in 1987.

Among those present at the gig was also Smiths' drummer Mike Joyce who wrote on his facebook:

So I'm at The Last Shadow Puppets gig tonight and Johnny Marr walks on and they play, 'Last Night I Dreamt...'  The guy next to me says, "Seen the guy on the right with black hair? That's Johnny Marr, the guitarist from The Smiths and this is a Smiths song they're playing". I didn't say owt, I just couldn't.