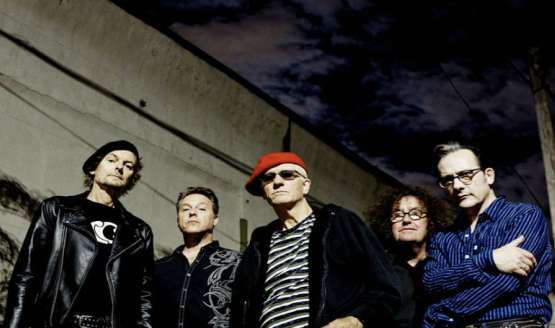 Propelled by an enormously successful PledgeMusic funding campaign, The Damned headed to Atomic Sound Studios in Brooklyn in early October 2017 and began a frantic, high-energy, nine day burst of creativity with famed producer Tony Visconti, whose list of past working-relationships reads like a who’s who of popular music. (David Bowie, T Rex, Morrissey, U2, The Stranglers, Iggy Pop and Thin Lizzy to name but a few!.) Reunited with former bassist Paul Gray (who played on classics The Black Album and Strawberries in the early eighties), the renewed line up took full advantage of the studio’s classic Neve recording desk, valve gear and vintage equipment to form the new record.

“We deliberately recorded the album retro style,” explains guitarist Captain Sensible. “The same way our debut album was made, basically. There’s something wonderful about the seventies sounds; glam, rock and punk records, they all sound so great and Tony specialises in beautifully crafted old school production. He had us all playing live, bashing it out in the same room with a focus on getting the initial band version of each song as close as possible to the finished thing. “

The first taste of ‘Evil Spirits’ comes in the form of ‘Standing On The Edge Of Tomorrow’, a song penned by frontman Dave Vanian.

Evil Spirits will be released on 13 April. Scroll down to read the full tracklisting and pre-order ithere.