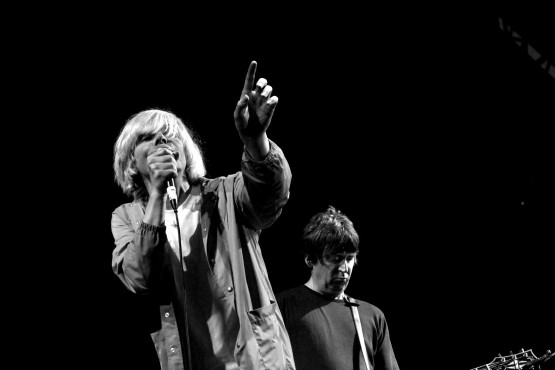 The Charlatans at Umbria Rock.

The venue itself was pretty impressive for a start.  Umbria, set in the Perugia region is a wonderful setting for a gig especially if  the weather is good and it was absolutely fantastic. Warm, sunny Italian summer day, an average temperature of 29º - 30º C , pretty warm day I'd say. Spectacular surrounding for an outdoor gig.

The Charlatans got ready to go on stage with Tim Burgess wearing black jeans, a white tee and his usual blonde bowl-haircut. The band were forced to change their schedule as The Courteeners cancelled their show due to illness.  It was a slightly too-long gap of more than 50 minutes but finally the band took to the stage at about 8:45 pm. Previous support acts came from The Doormen and Bond Street two Italian bands. It all looked good to continue this second day at Umbria Rock.

Kicking off with "Just When You're Thinkin' Things Over" the 1995 single released from their self-titled fourth album was a great start and a great move as the Italian crowd switched into full-on bouncing euphoria. The sound was great and the stage was huge. We agreed on one thing with my mate and it was that after almost 25 years in the industry, Burgess is still as captivating as a frontman as ever.

Burgess addressed the audience and the band's classic tunes "Oh Vanity", "Weirdo", "Can't get out of bed", "North Country Boy", "Toothache" all followed in quick succession and a selection of favourite album tracks were also thrown into the set.

The crowd went absolutely mental when "The Only One I Know" kicked in - the band's first top-ten hit and this classic, despite all their other charting hits, is the song they seem to be most closely linked to. You could tell by the excitement of the almost moshing crowd. Tim Burgess stood with his hands in the air looking out at the audience on this beautiful summer Italian evening,

Then it was the time for ‘Tellin’ Stories’ title also of Tim’s autobiography published back in 2012, quickly followed by another highlight of the night ‘One To Another’ from 1997 album. Despite the warm weather, there was no sign of exhaustion, everyone was singing and dancing to their classics.

The band closed their fairly uninterrupted 60-minute set at about 9.45 pm with another track form their debut album "Some Friendly", "SPG".

When you see the Charlatans on stage and think about their career; the highs, the lows, the joys and their stories, there is a sense of The Charlatans being that sort of band who will never quit, who will never call it a day, who will be together through thick and thin, who stay together forever. They still sound fresh 25 years on from their release.

The atmosphere they created at Umbria Rock last night was testament to The Charlatans’ timeless tunes and the fans devotion to the band led by Burgess. The songs were played, and came across as nicely as one would expect from a band like The Charlatans.

All in all, their show lived up to everyone's expectations and it is good to see them and to know that there is a new studio album on the way.

Can't Get out of bed

The Only One I Know