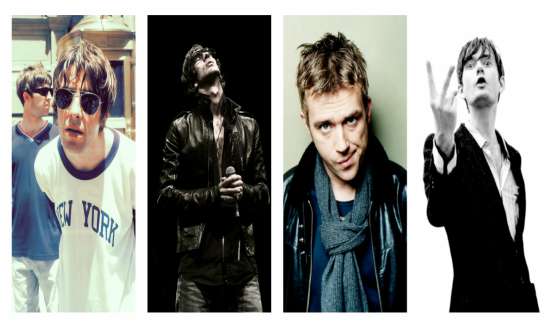 The '90s were full of world-conquering tunes especially in the UK. Not surprisingly, the 90s were known in the US as the second British Invasion with bands such as Oasis, Blur, Pulp, Suede, The Verve among others.Many of the bands listed above topped the UK charts for over a decade. We've ordered them from the beginning to the late 90's.

So many songs, though. So hard to pick 25 when so many anthemic songs were written but it's undeniable that it's a pretty good list!!

The Charlatans  The Only One I Know

The Happy Mondays Step On

Blur There's No Other Way

Primal Scream Movin' On Up

Supergrass I Should Coco

Suede The Beautiful Ones

Space The Female of The Species

OCS The Day We Caught The Train

The Seahorses Blinded By The Sun

Travis All I Wanna Do Is Rock

Echo and the Bunnymen Nothing Ever Lasts Forever

Noel Gallagher: "The 90s were brilliant"