Back with some banging interview chat and new album, Natural Rebel, has got everyone in my social circles once again talking about the undeniable talent that is Richard Ashcroft. The Barras is always special, throw-in opening night of the tour and pay-day Friday and you have fireworks going off a week or two early. Arriving at the Barras the queue is stretched around the building and as I make my way up the stairs I am stopped by a friendly face who asks if I would like a signed star? “How much” is my response only to be informed Richard has signed hundreds of golden stars to be given free to fans on entry to the gig. I respond with “you’re kidding” or words to that effect only to be given a couple of stars. At this point the thought enters my head, perhaps the new album should have been called Natural Classinstead as that has been my impression of Ashcroft since the time I witnessed him carry on (should I say start) a gig on his first solo tour after getting malcied in the face with a bottle from the crowd.

As the crowd trickles in, I secure my stars safely in my camera bag and gather my thoughts for the forthcoming action. Disappointingly, there is no support which I think is a real shame as I know a number of Scottish artists who would gladly walk over hot coals for the opportunity of opening for Mr Ashcroft. The pre-gig music is also very subdued and it results in opener ‘Hold On’ not quite getting the explosive welcome from the crowd it merited. Dressed in the now familiar custom sequin jacket and wearing Ray-ban shades, Ashcroft looks and sounds every bit the “rock star” we all love. Vocally flawless, ‘Sonnet’ follows to the delight of the crowd who respond in full. The animated Ashcroft, pumps his chest a number of times during ‘Break the Night’ before flexing his muscles “Hulkamaniac” style and chasing a few remaining photographers from the pit.

Not that anyone is caring but being the opening night of the tour, there are couple of loose moments with the set-list order. It’s rock ’n’ roll after all and adds to the authenticity of the night. New track ‘Surprised by the Joy’ is well received by the adoring crowd with many trying their best to match Richard’s vocal. Ashcroft draws further cheers as he declares “we can all have a little sunshine in our lives”. The punchy ‘Born to Be Strangers’ is a live standout with a real bite to it whilst the lights from the stage radiate power throughout fan favourite ‘Music Is Power’ alongside Ashcroft’s incredible vocal.

‘That’s How Strong’ is another standout from the new tracks with Ashcroft singing his heart in unison with the crowd. In contrast, ‘Money Money’ gets the crowd bouncing as guitarist Steve Wyreman’s frenzied thrashing alongside Damon Minchella’s bass and Steve SideInyk pounding drums brings the track to a pulsating climax. Towards the end of the night, Ashcroft asks the crowd if they managed to get one of the signed stars on the way in. Evidently I was not the only one suspicious of the free gift as Richard shares a story of a girl asking the friendly star giver “what’s the catch” before Ashcroft reminds the crowd that “sometimes there isn’t a catch and you do things just for the love of it”.

‘Drugs Don’t Work’ is somehow bigger than I remember from a few years back at Glasgow’s terrific Academy. With his acoustic guitar, Ashcroft belts out the classic with the track growing and going to another level as his band returns to the stage. ‘Lucky Man’ and ‘Bittersweet Symphony’ threaten to shake some of the old stars off the Barras roof and Richard gets caught up in the moment as he breaks the arm from his trusty mannequin and then attempts to play Steve’s guitar. It’s a sore end to the night for the male mannequin who has done a grand job of modeling one of the new RA T-shirts whilst also providing a safe resting place for Richard’s trusty floppy hat and stunning sequin jacket. Overall, it’s another special night to remember and as fans head down the stairs talk of his return to Scotland and Edinburgh’s Usher Hall next year arises.

What a night, music is indeed power and tonight the irrepressible Richard Ashcroft once again shook the old Barras.

In other news, read an exclusive interview with Richard Ashcroft. 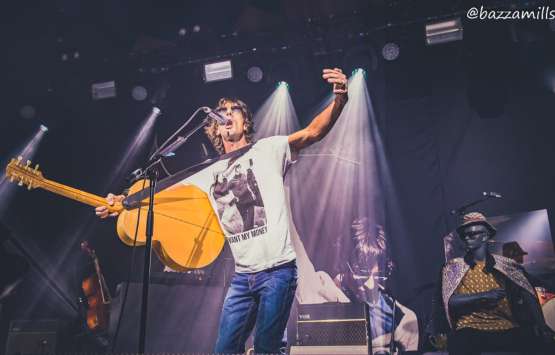