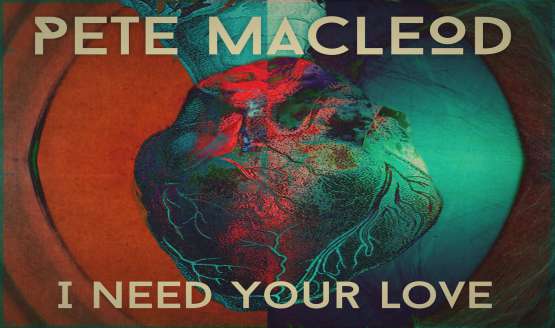 So you think you know what to expect from Pete MacLeod, right? Think again.

The steely-eyed determination is still there, but the musical direction we thought was cemented by his stunning debut album Rolling Stone has.. well. rolled on. Pete, you see, isn’t an artist you’re ever going to be able to pigeon-hole. Rather than build on what he’d achieved - not least vast critical acclaim around the world - by continuing down the same path, he’s torn up the rule book with his scintillating new record. So rather than acoustic-driven Americana, Pete has plunged into the pool at Ibiza’s legendary Privilege club, metaphorically speaking. He’s bathing in the warm waters of Balearica, bringing lush, warm keys and sunset evenings rather than Route 66.

A bit of a departure, by any standards - so new track I Need Your Love, a free download available right now, is a sort of bridge between America and Ibiza, or between Pete then and Pete now - a much greater distance than the geographical one.

The man himself said: “I started writing the song in the morning with a guitar riff I had...simple chords really.

“Lyrically to me it’s one of those songs that’s positive about loving what you do and those around you. But also not accepting anything less knowing that this kind of love can save you....especially in the middle 8 part. ‘Something always saves me from falling, looking for your love must be my calling, sun in the sky, we live till we die, the truth ain’t a lie’. “ The tune - along with much of the new record - was penned at the studio of legendary producer Youth in Spain, which doubtless enhanced the Balearic mood. With tour dates supporting the Happy Mondays imminent, Pete also had Madchester on his mind, and the collision of the two influences has produced another uniquely MacLeod musical moment. “I finished the track in Spain at Youth’s studio. During the sessions Youth suggested I write a middle 8 part for the song. I really connect with the middle 8 part. It came to me very quickly and the words just followed each other as I sang and played the song.

“The end result musically is a definite nod to the many Manchester artists that have inspired me over the years to become a songwriter...after all Glasgow is only four hours away from another great City that boasts equally great music.” With single Minotaur burning up the White Isle this summer after Pete hopped over to hand deliver some rare white labels, excitement is building ahead of the release of the new album - expected early 2016, once labels stop fighting over it.

And the album is a monster. Just ask Alan McGee, the mastermind behind some of music’s biggest acts and the man who came out of retirement to manage Pete. Alan said: “Pete MacLeod is one of the most talented musicians I have ever worked with. I say that without any reservations whatsoever. His new record is stunning. “He’s as good as a singer as Liam or Ashcroft. An absolute top shelf vocalist.

“The songwriting and matching of Youth as producer and Peter as artist is musical alchemy...long live the magic of music. “These songs show Peter’s vocal range, which is phenomenal. The album is one of the best records I’ve ever been involved with.”

I Need Your Love is available now as a free download from www.petemacleod.net