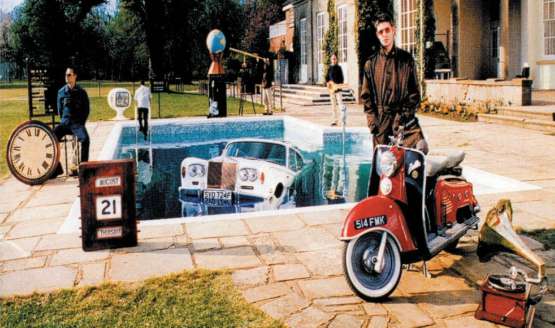 Oasis have revealed the contents of the super-deluxe box-set edition of their 1997 album ‘Be Here Now’.

The £100 super-deluxe box-set, out on October 7th, will feature a 12”x12” hardback photo book featuring exclusive sleevenotes and rare photos and an art print of the same size.

It will also contain the regular formats of both the CD and vinyl editions, which feature the original album remastered, a second disc of B-sides of the era plus other rare and unreleased recordings, plus a third disc of demos recorded by Noel Gallagher in Mustique.

The box also contains a 12” white-label sampler featuring six of the Mustique demos, a promo CD of Noel Gallagher’s recent ‘2016 Rethink’ remix of the album’s first single ‘D’You Know What I Mean?’, a set of four phtographs and an embossed ‘Be Here Now’ enamel key ring.

The most exclusive music in the box-set is a 7” single featuring early demos of ‘Going Nowhere’ and the single ‘Stand By Me’, recorded by Oasis producer Mark Coyle.

The box-set is available to pre-order now from Oasis’ website.

As well as the album being remastered, the directors of the video for ‘D’You Know What I Mean?’ recently re-cut the video. Dom & Nic added in more footage of helicopters and of Oasis’ performance of the song.

In other news, Noel Gallagher on Oasis reunion, anecdotes, Liam Gallagher and more

So will you buy it or is it too expensive?