Oasis in Numbers. How big was Oasis? 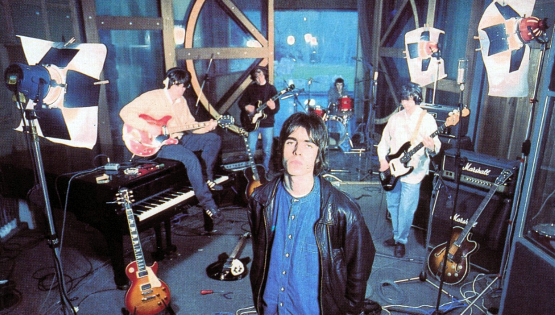 Incredible!!! the song 'Wonderwall' by the band led by the Gallagher brothers OASIS has reached 1 billion streams on the music streaming service Spotify. This is incredible and just shows how massive Oasis still are and how massive they were back in the day. Check out the numbers below

How big was Oasis ?

(I added some links to some great Oasis and Blur editions below and some great stuff for collectors. Check them out)

They were simply huge. Were they the biggest band on the planet as The Gallaghers believed? or as they used to say back in the day? Well probably not. In fact, the band never really made it big in America.
In 1997, they were the support act of U2 after releasing their album 'Be Here Now' Why was that? Well it's pretty simple (at least as far as I know) As Noel Gallagher once said: " Our singer was not like Bono or Chris Martin. He was more like Johnny Rotten. So it was difficult to conquer America when youve got someone like that". Just to mention a few examples, Liam Gallagher left their North American tour and stayed in England to sort his house out. The band cancelled a few gigs and  Noel also took over in some places. Probably their biggest mistake as well (well maybe Liam's) was to fail to show up at MTV's Unplugged in 1996.
Liam claimed he had pharyngitis and then he was spotted having a beer and smoking in one of the balconies. For corporate America that is not right and it never was. It takes money but also a lot of time to make it big in America. British bands usually complain about the long and endless tours across the country.

As an American once wrote:"I liked them in the beginning and they could have been huge if they spent more time and effort on their albums and hadn't been major a**holes. There's nothing wrong with being an a**hole in the music business but when your antics overshadow the music itself before you have earned a major following and lots of goodwill, you have problems." Being an 'a###hole' as this American put it was just what made Oasis massive in the UK; their swagger, their not giving a f### about anything, their working class, football related hooliganism came at the right time there. Oasis' timing was perfect. They filled that void left by the Stone Roses. I mean The Stone Roses had not split up yet but due to legal issues the band could not grasp that moment. As Noel Gallagher once said: "The Stone Roses opened the door for us." And that was basically it.
As I write this I just remembered that on August 14 1995, 25 years ago Oasis and Blur released their singles on the same day. That became known by the press as the so called battle of Britpop with Blur's Country House outselling Oasis' Roll With it. That chart battle believe it or not actually made the TV news. Incredible!. Both bands later acknowledged that these were not their best tracks but well just imagine Blur's Country House sold 274,000 and Roll With it sold 216,000 copies. Just imagine an album selling that today!!!

Well the truth is that Blur reached the number position that week but how does that compare with the Gallagher brothers' numbers I wonder ...And I took a look at that cos I know Oasis were huge back then. Well in 1997 before and after their third studio album 'Be Here Now'(Wow take a look at this  https://amzn.to/2C60d1E ) They were massive. Everywhere you went to there was someone who tried to look like them, dress like them, walk like them. At least this is what I saw there. There was this sort of communal thing of belonging to something I guess. Anyway. I did some research and gathered some numbers and if you take a look at the band and their sort of rivals, friends whatever. All those bands that made it big in the 90s, there is not a single band that can come close to them let alone these days. As Noel Gallagher said some time ago:"Oasis were 100 times bigger than today's big bands"

Let's first have a look at their singles

Now let's have a look at their albums

Plus the band have sold an estimated 75 million records worldwide.

Mind you, I love them both. ... (Well Ok Oasis a bit more) they were big but if you look at Oasis numbers they were massive.

Now let's have a look at what's happening today 25 yes 25 years later... This one is for all the millennials out there

So these are roughly the numbers. Well let's not forget that Oasis split up in 2009. Apart from all these numbers as Liam Gallagher once said: "The 90s were brilliant" And indeed they were. There were so many great bands: Pulp, The Verve, Radiohead, Supergrass, Ocean Colour Scene among others. None of these bands made it as big as the previous two. The Verve scored 1 number one single but didn't reach the number 1 position with Urban Hymns and Pulp for example didn't reach the number 1 position in the singles chart but scored two UK number 1 albums. Another band that comes close to Oasis when it comes to number 1 albums is Radiohead topping the album charts 6 times.