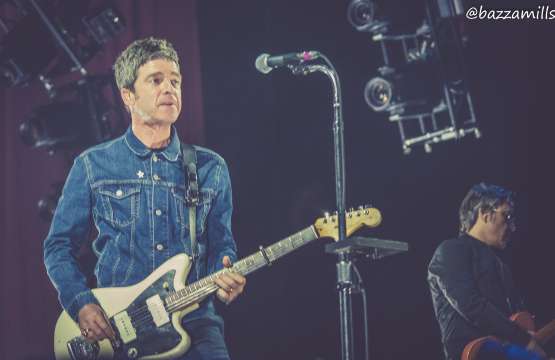 Powered by AB Project
Noel Gallagher’s Birds don’t quite reach a high cruising altitude…..
The Hydro is a buzz when I get there to see Noel Gallagher’s High Flying Birds. Out on the concourse it’s packed and I’m there quite early too as doors were at 18:30. Inside I’m in the standing and there’s lots of drinking and a bit of festival atmosphere amongst those in attendance.
The stage is busy with amps and instruments and a Manchester City flag draped over and obscuring something. The Lighting rig above the stage is set out in a arc which even before the acts take the stage is quite impressive looking.
With the arena not more than half full the first band take to the stage. Named after their frontman, and son of Ian of Blockheads fame, it’s Baxter Dury. He is in a sharp grey suit and quaffing wine through his performance, he has the air of an embarrassing Dad at a wedding crossed with Phil Daniels on Blur’s Parklife video, with his attempts at robot dancing. The songs have an air of 80’s electronica with a bit of Pet Shop Boys.
There are a couple of girls in glittery outfits and playing synths and singing backing vox, a drummer, bassist and guitarist on stage too. Baxter himself had no crowd engagement or chat for the audience. The room didn’t really know what to make of them and the reaction was muted.
I thought they were a terrible opener for someone with the profile of Noel Gallagher, and they didn’t really add anything to the atmosphere.
After the turnaround there’s darkness then a rising cacophony, slightly reminiscent of Beatle jibberish sounds of off Sgt. Peppers, which would seems fitting with the Gallagher’s penchant for borrowing from The Beatles shamelessly. This noise culminates in a blinding light and Noel and his High Flying Birds are on the stage with some geese animated on the huge screen behind them.
The opening track is Fort Knox and this is followed in quick succession by the next two Holy Mountain and Keep On Reaching. The crowd singing along to most of this although I’m not too familiar with the tracks.
The High Flying Birds are 11 pieces on stage with Synth, Percussion, Keys, Lead Guitar, Bass, Drums, a three piece horn section and Female singer who is on the stage periodically and Noel so there a lot of people there. The sound mix is very good and the light show is very very slick. It consists of a fully animated backdrop and video screen showing song specific images and film footage with every kind of retro effect applied.
My issue with the performance is the lack of it…..performance that is. 11 people on stage, a great lighting rig and digital visual display, an arena full of adoring, highly inebriated, especially for a Tuesday night, fans, and Noel’s name in the title of the band and we are 7 tracks into the set before he even says a word between songs - and even then it’s only to tell someone to ‘shut it’.
Tune 10 is a track from the Oasis days Little By Little and the reaction is monstrous, there’s beer cup getting thrown about and a lot of argy bargy in the crowd…this is followed by The Importance Of Being Idle - perhaps a commentary on Noel’s stage presence.
There is a real difference in the reaction to the Oasis stuff and the newer stuff as the crowd settle into a few of the High Flying Birds Tacks before getting another couple of Oasis tracks Half The World Away and Wonderwall before closing the main set with AKA….What A Life! The light show at this point is pretty special, elegant laser lighting in the darkness.
They come back to the stage after the obligatory Glasgow chant of ‘ere wi, ‘ere wi, ‘ere we fuckin’ go’ and play a four song encore, beginning with The Right Stuff then another couple of Oasis tracks Go Let It Out and Don’t Look Back In Anger. The show was closed with a cover of The Beatles’ All You Need Is Love which again is fitting the Gallagher’s MO of associating themselves with those pop icons. Large balloons fall from the ceiling, yellow, blue, red and green and are kicked about by the raucous crowd and from further back in the hall this is a great visual spectacle.
The gig was good is some respects, but I felt a sense of let down. Let down by the lack of stagecraft and performance. The light show and sound were impressive but they were the show, this felt like it reduced the band to a live jukebox playing older material, the Oasis tracks and closing with a cover version. 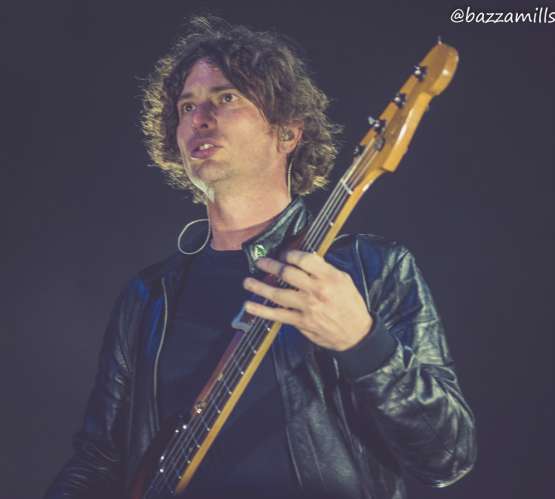 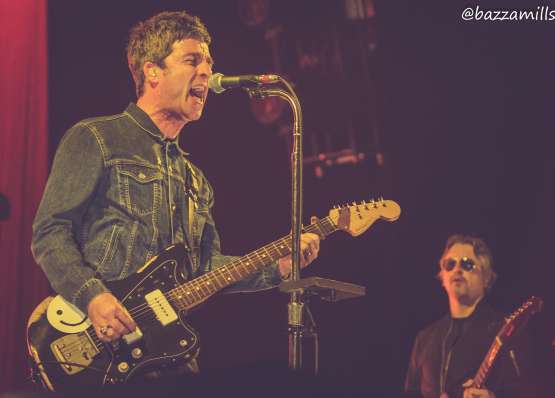 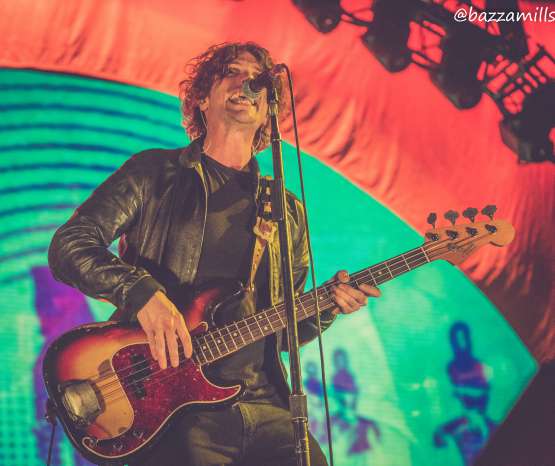 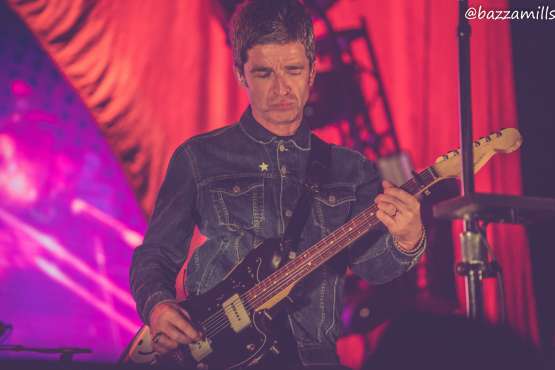 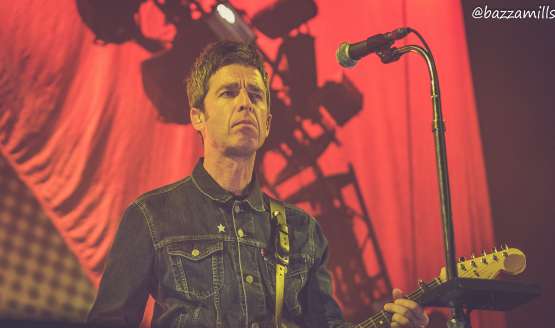 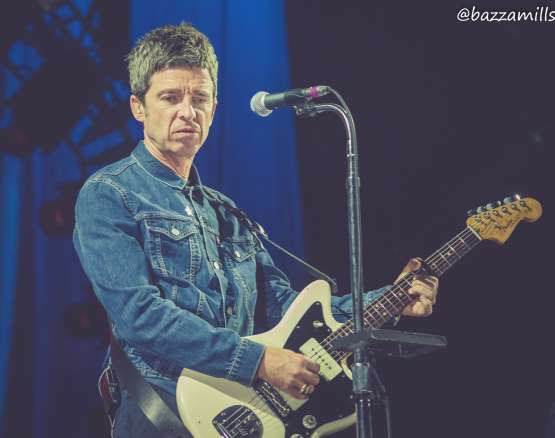 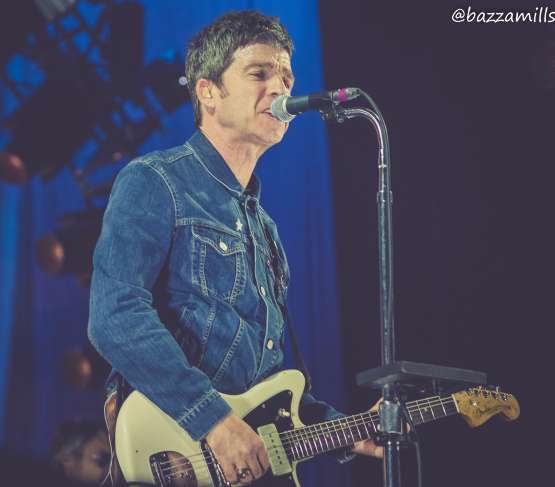 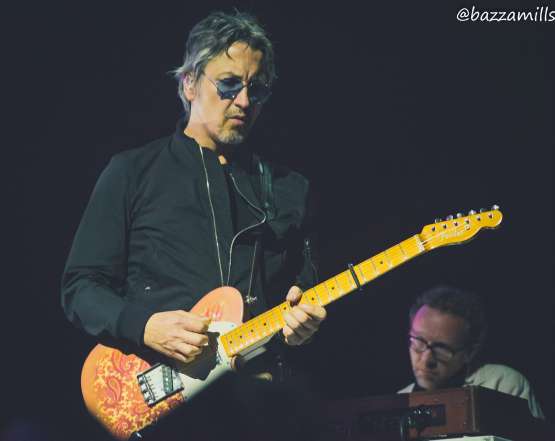