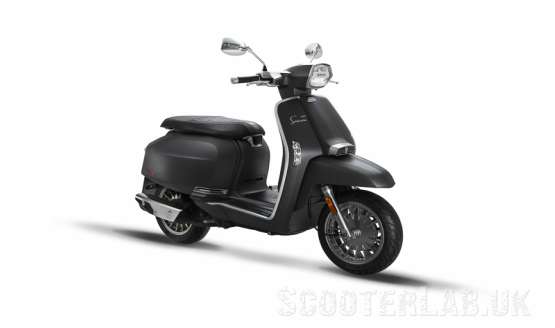 The long-awaited new Lambretta finally broke cover in Italy last month, revealed to the press and public during the Lambretta 70th Anniversary Euro rally it was always going to polarise opinion.

The reintroduction of an iconic brand name, a beloved marque still coveted many years after the closure of the Innocenti plant in Milan, as well as other Lambretta factories around the world, is always going to be controversial. A brand name as important to die-hard Lambretisti as Lambretta is worth its weight in original spec TV 175s. As a result a major percentage of original Lambretta riders aren’t going to like it unless it comes with a two-stroke engine, four speed gearbox and those little character traits we all love to hate from the original machines (character traits that many Brits spent hot days trying to fix as they rode to Italy last week).

The event was held at a villa outside Padua, the trade launch was undoubtedly a very glamorous scootering event. With potential importers from every corner of the world to impress, the development team were pulling no punches. It was obvious that the team behind this meant business.

Having secured the legal right to use the name, how did the team go about designing the V-Special? Walter is quick to offer an explanation: “There was no point trying to recreate what had gone before, so we asked ourselves ‘What would Innocenti be producing today?’” Like it or not the answer to that question is undoubtedly a four-stroke auto and that a significant number of its components would be manufactured in the Far East. What it would look like is far more speculative. To illustrate the difficulty of the design brief, consider a 1970s Rally next to a modern GTS. There are some similarities but the designs are light years apart. It’s only by inserting a PX and (dare I say it) a Cosa between them that the evolution becomes apparent. Unfortunately Lambretta’s lineage ended in 1971, so the V-Special’s angular lines come as something of a shock, particularly to enthusiasts accustomed to a marque that’s been frozen in time for decades.

Check out our scooter ride round Buenos Aires on a Lambretta 125 LD.

If you are travelling to Buenos Aires and want to visit some iconic places and football grounds, contact me via Instagram for further information.