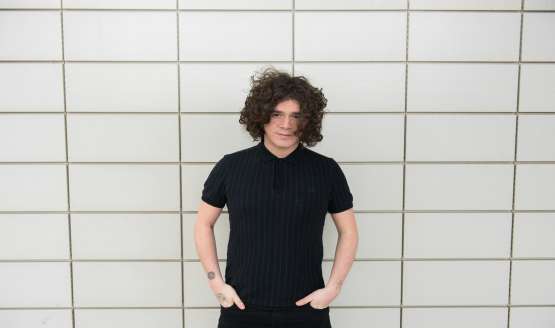 Fans of The View and Kyle Falconer will not be disappointed with his debut solo album No Thank You released July 27th on Riverman Records.

When The View announced “Ta,Ta For Now” with a series of live dates last year tongues began wagging around the sniff of a solo album from front-man Kyle Falconer. Evidently being propelled into the spot-light at a young age has left some battle scars with incidents of air-rage and Falconer’s spell in re-hab being well documented. Pleasingly, Falconer appears to have found solace in his family, embraced fatherhood and from the once highly charged mayhem has emerged an eclectic collection of infectious melodic songs that will delight.

Recorded at Paul Weller’s Black Barn Studios, string laden opener ‘Poor Me’ has a chorus based on the Alcoholics Anonymous mantra and Kyle leaves nothing in the tank as he bellows “poor me, poor me, pour me another drink”. The outpouring of anguish is tangible and its powerful stuff from the off as Falconer appears to successfully exorcise his demons. ‘Avalanche’ is an early standout with an uplifting vibe as Falconer sings “I’m just sitting waiting for the penny to drop”. Such is the genius of Falconer, he reflects on his journey and writes a song titled ‘The Therapist’ with an innocence in the delivery that will sooth the soul of any listener. This continues into the next track, ‘Japanese Girl’ as he sings in his Dundonian accent “when it all falls apart, I’m going to find a Japanese girl”.

The dreamy melody of ‘Confusion’ is another high-point whilst the contagious ‘Family Tree’ will have the listener chanting along “I’m growing up you see, I’m putting bottles of whisky and vodka behind me”. The 11 tracks on offer flow with ease with influences of the Kinks and Beatles “peppered” throughout as a sense of optimism shines through. Reminiscent of America and The Eagles album closer ‘Last Bus Home’ seems destined for my next Big Sur playlist as the sun sets and I hit the play button once again. Make no mistake, Falconer is maturing, taking his audience with him and there is universal appeal about these songs that may just prove game changing and connect to a whole new fan-base.