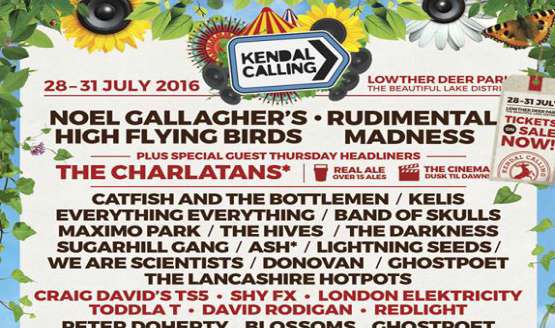 With some sun even forecasted this coming weekend, Kendal Calling promises to be nothing short of brilliant. From humble beginnings in 2006 when the festival had a capacity of 900 people housed mainly in a circus big-top, the festival has continued to grow with an array of impressive headliners scheduled to mark the 10th anniversary. Thursday will see Kendal’s favourite coffee drinker Tim Burgess and his legendary band The Charlatans headline the main stage with Rudimental, Madness and Noel Gallagher completing the headline slots through to Sunday night.

I will be heading down early (mega early) on the Saturday to pitch a tent and head into the festival site to catch a few of the early treats. My Saturday hit-list is extensive and all going well I hope to catch 90s favourites Dodgy. With a new album due in September I am expecting their set to include ‘In A Room’, ‘Staying Out For The Summer’ and ‘Good Enough’ as well as some new material including new song ‘You Give Drugs A Bad Name’. Oldham four-piece Cupids are a must with their cracking tracks ‘Money’ and ‘Kickin’ In’ sure to go down a storm. ‘Sunshine Superman’ Donovan is also high on my must-see list and with Maximo Park, The Darkness, The Hives and Madness all on the main stage my camera is definitely  going to need a few memory cards. Coffee breaks will also be required and there is only one place for that…Tim Peaks Diner (the log cabin serving up the Tim Burgess Twitter inspired coffee). Who knows, if I time my breaks right I might even catch some Hatcham Social and/or Scottish band BMX Bandits (some I know would say this is a must). Over at the Calling Out stage I am aiming to hear a bit of upcoming Scottish band Model Aeroplanes. Latest track ‘Whatever Dress Suits You’ is a belter and the lads are even better live. It is no wonder people are talking about this band, catch them now before they explode! Libertine Pete Doherty also headlines the Calling Out stage so it is going to be a busy day, for sure but if I can stretch it I will also join MC Tunes at the House Party Stage (for a tune at least, it would be rude not to). What can I say, Saturday.. spoilt for choice!

Sunday (in theory) looks to be a much easier going kinda day and I intend to take in a bit of the Carvetti and Woodlands stages, after a visit to Tim Peaks Diner of course. Sheffield’s band of two sets of brothers The Sherlocks will blow away any hangovers from ‘Last Night’ with their dynamite tracks and a set that is sure to include ‘Live For The  Moment’ and ‘Escapade’…highly recommended! Hip-hop pioneers The Sugarhill Gang are bound to delight the crowd while Ian Broudie and his band The Lightning Seeds are a must on the main stage. Clint Boon (Inspiral Carpets main man) will be DJing on the Calling Out stage and sending the ‘Boon Army’ nuts, meanwhile his old roadie Noel Gallagher and his High Flying Birds will be closing the main stage and bringing the curtain down on what I am sure will be another awesome Kendal Calling.