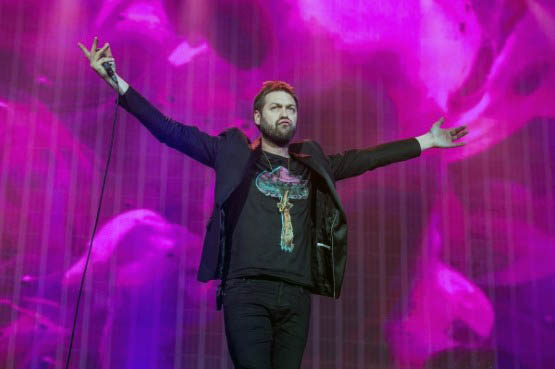 ‘LEGO ED’S NO LEGEND' Kasabian’s Tom Meighan takes a pop at ‘Lego man’ Ed Sheeran and says it was ‘great to knock him off top spot’ in the charts.

But unfortunately for him, there’s no escaping the wrath of KASABIAN.

The Leicester rockers — clearly not satisfied with ending his two-month reign at the top of the album charts earlier this year — have laid into their chart rival and accused him of being plastic.

In an exclusive backstage chat at Reading Festival, frontman TOM MEIGHAN said: “He’s a Lego man. “He’s made out of Lego, bless him. “He’s a nice chap, I can’t wish him wrong, but he is what he is, you know? A product of today.”

Guitarist SERGE PIZZORNO also took a pop at Ed — who we have mocked up as a Lego toy.

He said: “It felt great to knock him off the top because it’s our fifth No1 as well. Every now and again people do need to be reminded that there’s more out there. This is our world here — our world’s Reading, his world’s Legoland.”

The fresh feud comes three months after Kasabian — who played the headline slots at the Reading and Leeds Festival across the weekend — dethroned Ed at the top of the album charts with their record For Crying Out Loud.

Read this Kasabian on Oasis.