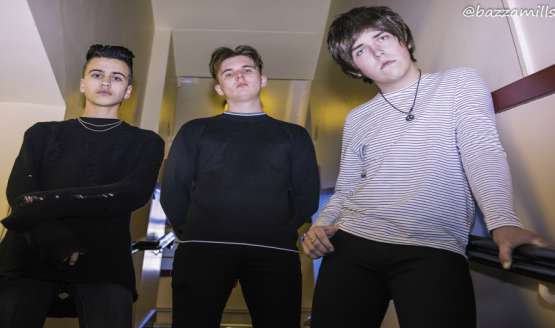 Hi folks…Bazza Mills here with DOGTOOTH….lads how are you all?

Craig: Was great to see you in Falkirk at the Vapors Gig!!

Firstly, the name, Dogtooth where did it come from?

John: Craig came up with the idea!

Robert: It comes from the black and white pattern!

So how did Dogtooth get together as a band?

John:  Craig and I met by chance at the annual Millport Scooter Rally in August 2013 when we I was 11 and Craig just turned 12!  I was playing my papas old acoustic guitar outside the beer tent and Craig’s dad Jim heard me play “That’s Entertainment” by The Jam.  Later that night he tapped my mum on the shoulder asking if her son was in a band.  At 11 I wasn’t but it was my absolute dream even then to be exactly that!  Jim introduced me to Craig and we hit it off straight away!! We ended up spending the rest of that night listening to music in his Dads van!! We laughed and said “Right – our first gig will be back here on the Saturday afternoon in the beer tent!”  As it happened though we actually returned to headline in the town hall on the Friday night!! We met up every week after that to practise together and it was about 8 months later we found Robert at Tommy McGrory’s Loud and Proud where he was playing drums in another band.  Tommy asked him to come in to play drums for us for the afternoon and 3 years later we still have him!!

Craig: I met John at the Millport Scooter Rally when I was 12 and John was 11.  I was with my dad when we saw John playing an acoustic guitar.  My dad spoke to Johns mum later that night about being in a band with me and we met up the next week at John’s house and we just clicked straight away!!  We started to rehearse in Paisley as that was half way from where we both lived.  Tommy McGrory of Loud and Proud helped us out with that and he also helped us find a drummer.  The first few were not as committed as me and John were so we ended up waiting about 8 months to find Robert.  Funnily enough he was rehearsing in the same place all the time but with another band.  Robert joined and our first gig together was just 4 days later!  We rehearsed every week and had a good set of covers really quickly and began gigging most weekends.

We went back to the Millport Rally the next year and headlined on the Friday night exactly one year to the day that I first met John.

Robert:  The band was formed in Millport during the annual rally held there, John and Craig met and 7/8months later I joined after stepping in to help out for a practise afternoon, I fitted in with them so well and enjoyed the type of music they wanted to play so much that I’m still here!! We ended up headlining the same scooter rally exactly a year after John and Craig met!

Describe your music in 3 words.

Who would you say your main influences are?

John:   My influences have got to be Noel Gallagher (it was listening to Oasis that made me want to play guitar), Paul Weller, John Squire, Johnny Marr, Van McCann and Luke Pritchard.

Craig:  As a bass player I take my influences and inspiration from JJ Burnel – The Stranglers and Norman-Watt-Roy – Blockheads and Charlie Salt – Blossoms.

Robert: For me personally as a drummer Keith Moon, Ringo Starr and John Bonham are my favourite drummers!

Gig wise you’re a busy band, what has been your favourite gig to date and do you have a favourite venue to play?

John:   The Barrowlands, Cavern Lounge, Paisley Town Hall, the Armadillo and plying live in HMV Argyle Street but our “Breakthrough” EP launch in Audio, Glasgow has topped it for me! There is such a great atmosphere in Audio and that night it was jumping.  I could actually feel the energy from the crowd and I just loved it!! Hearing everyone sing back out lyrics was amazing!

Craig:  I think I would choose the Barrowlands.   We have played so many great venues but there is definitely something about the Barrowlands for me!  Like John and Robert I loved HMV and Audio for our “Breakthrough” launch too!

Robert:  Launching our EP has been amazing! The instore at HMV, Argyle Street and our own launch in Audio was definitely one of our best gigs yet, but, the Barrowlands may just edge it for me!

Your live sets typically include some cover versions,do you have a favourite artist/song you enjoy covering?

Robert: Catfish & The Bottlemen, Oasis and Supergrass are my favourites just now.

Pre-gig do the band have any rituals?

John:   Having a laugh and eating grapes!

Craig:  Nah!  Just messing about and having a laugh!

Robert: Personally, I just drum on everything and annoy everyone!

The band has recently put out a new E.P,'Breakthrough' talk us through the tracks on it.

John:   I think you can hear the influences of all of the bands that we like, all the tracks are completely different.  Different influences, different sound.  We hope to keep that going with all of our tracks, keep them interesting.

Craig:  Difficult one.  They are all quite different, we could spend a day talking about how they all came about!

Robert: The EP includes 6 tracks which are all original.

How does the song writing process work for Dogtooth?

Craig:  Just bouncing ideas off each other in the studio till something happens!

John:   As Craig says, if one of us comes up with something we bounce it of each other, add, change and usually something happens that we all like!  Its definitely a group effort!

Robert:  We usually all just get together and batter out some tunes, nothing much to it really.

Dogtooth t-shirts and pin badges on the Merchandise stall...you seem like a well organised band on the up, is it all just falling into place or are Dogtooth gradually building up a following through hard work?

John:   Doesn’t feel like hard work, School IS HARD WORK!!  We have all became good friends through spending time in rehearsals , travelling and gigging! We have played over 200 live gigs and have to say I have enjoyed every minute! I love practising with Craig and Robert and it never feels like work!  We have built up a following of great people and always see some familiar faces at our gigs, the support from everyone is brilliant!

Craig:  Agree with John on this one!  It’s not like work at all!  We really enjoy each others’  company and hope to keep building the support the more we play.

Robert:  We’ve worked extremely hard.  We put in the time and that’s why I think we have come so far.  It’s been great! The support we’ve been given and we hope that it can only get better!

Dogtooth have a number of gigs coming up and your playing the Millport Scooter Rally this summer, how did that come about?

John:   This year will be our 4th time playing at Millport!  Something special about it as that is where Dogtooth was born!  Always a great weekend of live music, great friendly atmosphere with great people!

Finally, what do Dogtooth hope to achieve over the next 12 months?

John:   I suppose the next thing for us would be an album of our own.  That would be great! Also to get to play some of the big festivals would be brilliant! Need to grow older faster for that though!

Craig: Working on more of our own stuff and getting an album of our own out would be brilliant!! We will do that eventually and hopefully get to play some of the bigger festivals.

Robert: Well we’ve got a full set of original tunes now which is great but I think adding to that in the next year and eventually bring out our own album.  Also be great to get a slot at some big festivals.  All three of us love playing live!

DOGTOOTH : Cheers Bazza!! Hope to catch up with you again soon! 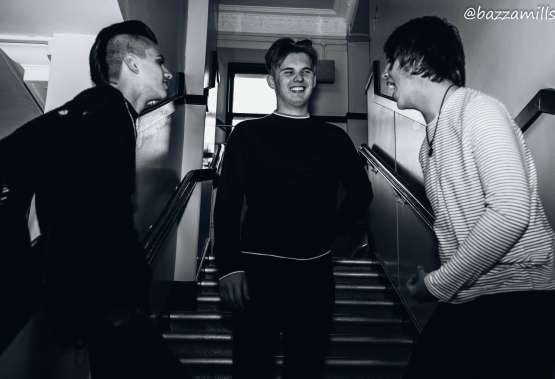