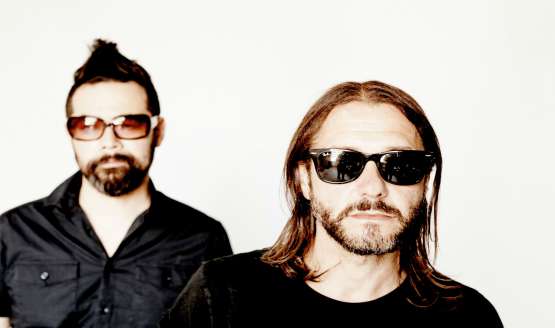 With a back catalogue consisting of nine albums, the double Best Of album takes the listener on a journey throughout the bands career that will delight existing fans or prove popular with casual fans. The die-hards (and make no mistake, Feeder fans are a loyal bunch) will undoubtedly opt for the deluxe 3-CD version while the purchase of the double CD will be a great addition to any collection for casual or new fans. New fans? You betcha! Feeder have always been a something of a festival staple and after catching them live at two festivals over the summer the number of young(ish) festival goers wearing Feeder T-shirts is testament to the songs in the bands armoury.

There is no chronological approach to the Best Of with the two CDs more reflective of a couple of rip-roaring live sets. ‘Feeling A Moment’ kicks the compilation off with tracks from Feeder’s two most commercially successful albums Echo Park and Comfort In Sound featuring heavily on CD one. The definitive Feeder sound fusing melody with stonking guitars and pounding drums has been fine-tuned over the years and if there was another 90s band that captured the sound of both grunge and Britpop as well as Feeder did I would love to hear them. Songs such as ‘Comfort In Sound’ evidently influenced Scots rockers Biffy Clyro, who supported them on the tour, whilst ‘Just The Way I’m Feeling’ and ‘Forget About Tomorrow’ induce an endorphin high and lift the soul. Echo Park singles ‘Buck Rogers’ and ‘Seven Days In The Sun’ sound as fresh today while tracks such as ‘Eskimo’, ‘Renegades’ and ‘Lost & Found’ ensure the first disc glides effortlessly through the mesosphere.

CD two erupts with ‘We Are The People’, ‘Universe Of Life’ and ‘Idaho’ while the appearance of ‘Paperweight’ from 2016’s All Bright Electric provides an opportunity for a fist pump mid-album. ‘Miss You’ and ‘Children Of The Sun’ close out CD two and as a fan of the band wanting more the release of nine new songs on Arrow hits the mark. Speaking to Kulbrtiania back in August front-man Grant Nicholas commented the inclusion of the nine new tracks on Arrow keeps it interesting for the fans whilst keeping it fresh for the band.

Opening track ‘Figure You Out’ is a Tom Petty inspired love song whilst lyrically reflective ‘Veins’ is terrific and highlights a maturity that I hope to see develop over the next 21 years. Title track ‘Arrow’ has a heavy, dark vibe with an uplifting middle eight whilst closer ‘Landslide’ is another highpoint.

Best Of Feeder/Arrow is released on 29th September via BMG Records.