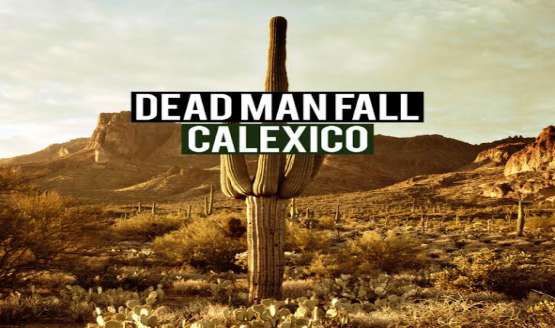 With Christmas festivities and the usual Christmas tunes infecting air-waves there are always a few songs that sneak by in December. Fortunately ‘Calexico’, the 8th studio release by Glasgow’s Dead Man Fall did not fall into that category.

Inspired by their frustration at being refused entry into the USA, the release of ‘Calexico’ rounded off a rather incredible year for the band that included reaching number one in the US iTunes charts with the colossal ‘Bang Your Drum’ and a pulsating set at Strathallan’s first T In The Park.

Accompanied by a memorable fluorescent video the band are somewhat unrecognisable as the contagious bass-line and drum-beat penetrates your ears and spirals repeatedly through your head like a hypnotic infection that no medication is going to shake. Within a few listens, I am struggling to sit still and find myself dancing about (albeit in a slightly cooler fashion than front-man Des McCabe). As Des sings “wait all night to cross the borderline, desert sand collecting in my eye” you get a clear sense of the frustration that must have burned in these guys at being denied the opportunity of playing live on The Late Late Show.

‘Calexico’ is currently available on iTunes or you can check out the video for yourself below:

With Craig Ferguson from the Late Late Show joining Dead Man Fall on stage at the Oran Mor last December, 2015 was topped off in style and it is now all about 2016. Onwards and upwards…no falling down for these dead men!