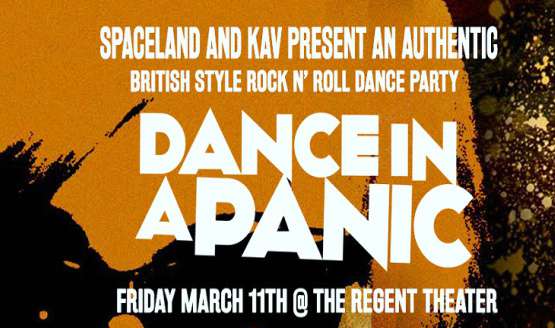 KAV and Los Angeles promoter Spaceland launch, DANCE IN A PANIC, their authentic British style monthly Rock N' Roll dance parties on March 11 at The Regent Theater in Los Angeles. Events where the boundaries between indie & alternative & live & electronic music become even more blurred & intertwined.Each month internationally known guest artists & DJs hailing from the UK and Los Angeles will be a fixture at Dance In A Panic filling the dance-floor with anthems from their record collections. Creating a British-style dance-party / club event in Los Angeles where everyone can dance till late, long beyond the standard show.

From April 30, Hooky will be a regular feature of the nights, inviting his friends to join him DJing Live from Manchester - broadcasting the sets straight to The Regent Theater via LA's groundbreaking event-to-event streaming platform "Clubcast". A first for the indie/ rock n'roll club scene!

For the launch night there will be a screening of an exclusive, pre-recorded DJ Set from Peter Hook filmed at his club FAC 251 in Manchester (site of the former Factory Records offices). Kicking off the first night on March 11 will be... together PANGEA

Hot on the heels of a European tour & London NME Awards show in London, together PANGEA will be headlining the launch party. Following therelease of "the Phage" produced by Tommy Stinson (ex-Replacements) & their return to Burger Records last summer, the band has found itself playing to a growing number of fans, with this much anticipated LA performance being no exception.

British, LA based solo artist KAV is the promoter & resident live act. He will be joined monthly by special guests from some of his favorite bands. KAVreleased his solo album "The Man With No Shadow" in August 2014. His music has been compared by the press with BRMC, Primal Scream, The Stooges & Kasabian. KAV played guitar for British band Happy Mondays touring internationally with them from 2004-07 (including a Coachella Festival performance in 07) & co-writing their latest album.

Support comes from Gateway Drugs who toured last year with the likes of British bands Ride & Swervedriver, with a recent appearance on Last Call with Carson Daly.

Magic Wands return with their highly anticipated sophomore album Jupiter Feb 26th on Cleopatra Records. You may know them from their infectious single Black Magic from their debut album Aloha Moon featuring "Space" which was praised by Spin Magazine as "a sexy and propulsive stunner" earning the band opening slots for The Kills, The Horrors, The Breeders, The Jesus and Mary Chain, The Black Keys and more.

Music selections on the night come from Dan Mancini who is DJing the launch with his partner Lindsay Mancini under the moniker TSR Airlines.New Zealand born Dan Mancini was co-founder of Hollywood residency Columbia Room 116 with Tim Burgess (The Charlatans) and founder of Soundgasm with Anton Newcombe (Brian Jonestown Massacre) & Jason Anchondo (The Warlocks). He has an impressive DJ resume & a long history with the indie rock club scene in LA & internationally.

Also hitting the decks will be Pop Noir an indie/ electronic duo from Manchester by way of Southern California & man-about-LA DJ Clifton (a.k.a Soft Touch). 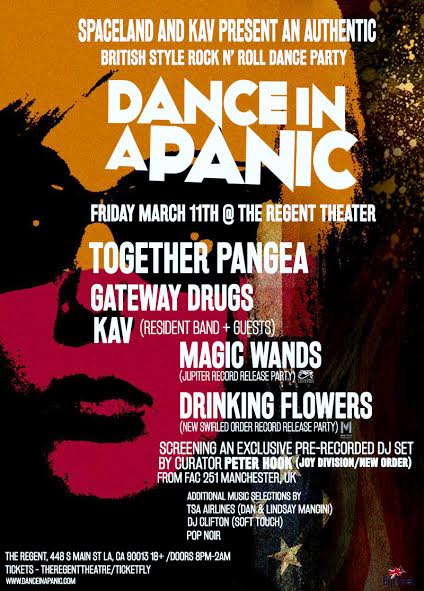