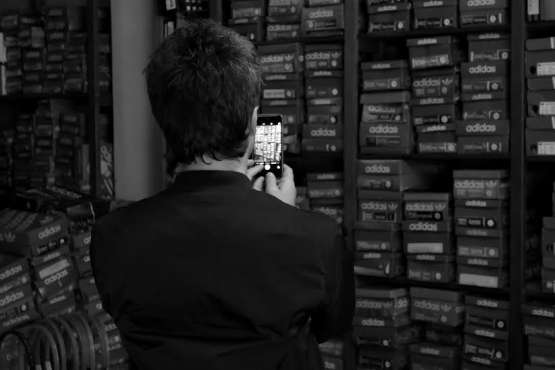 A Manc legend said once 'It's not where you are from, it's where you are at' ... and for the second time in less than a year, me and part of the kulbritania team in Buenos Aires have had the chance to spend some time with two Manc legends; legendary Stone Roses frontman and Godlike Genius Ian Brown last October and this year, another Godlike Genius, his friend Noel Gallagher.

Back in 2015, during the shooting of Sole Searching South America chatting with Gary Aspden and Ian Brown.

For those of you who don't know, Carlos Ruiz became a bit of a celebrity in the adidas world. A few years ago, Gary Aspden put together a team of adidas fanatics - including Stone Roses' frontman Ian Brown, Robert Brooks and Mike Chetcuti - and travelled to Buenos Aires to visit a shop stuck in time with vintage adidas shoes.

The first time the showstudio team were at Carlos Ruiz's shop was in 2012 but it was last year that the team travelled back to Buenos Aires to give Carlos the shoes endorsed with his name - the New York Carlos SPZL. We collaborated with Gary and his team last year in Buenos Aires and - knowing what a big fan of adidas Noel Gallagher also is - Gary suggested he should check out the store. So after visiting Bombonera stadium on Friday 18, Noel Gallagher together with Russel Prtichard came to the store to have a look around at all those vintage shoes.

When the documentary was first uploaded, people thought it was a publicity stunt. Carlos himself told us once 'People thought it was a marketing campaign or something'. The truth is that the shop is there, it is real and it is in the heart of one of Buenos Aires most traditional neighbourhoods; Mataderos.

Noel got there at about 430. There was heavy traffic and they were driving all the way from La Boca which is almost 20 km away from Carlos's shop. We'd told Carlos that one of Gary's friends would pay him a visit but we never revealed who it was just in case.  We did not want anyone to know who would be there and we wanted to make sure Carlos would be in the shop. He was pretty anxious to know who this man would be. He smiled and asked "Who's coming then? Obama? Mick Jagger?".That was funny really. Bet he was not disappointed, though.

We were with Noel Gallagher and his band before and after the show at Luna Park Stadium in their dressing room and we chatted with him quite a lot. I remember telling Noel about Carlos and the store saying "Carlos is a legend". Noel looked at me and said "So AM I" and added "Let's see how many tunes he's got" laughed and grabbed another beer bottle. He was in a great mood on Wednesday before and after the show. I guess that is the way he is.

So going back to the shop and his arrival, Noel got out of his black Mercedes, greeted me and part of our team outside and went straight into the shop to say hi to the other 'chief' Don Carlos who was waiting for him inside.  Carlos made it clear from the start that our friends and Gary's friends were welcome in his shop and they could do whatever they wanted to in the store. You should have seen Noel's face ... and Russel's. Guess they just couldn't believe all those blue boxes that had been kept in there. Noel took out his iPhone and started taking some pics  'I'm sending this one to Gary' he said and smiled. There's a picture of Mikey Hawkey (a.k.a  A Guy Called Minty) there in the shop and they stood there looking at it going 'That's great. He's a talented artist'. 'Yeah, he is" they kept saying.

Then we showed them round the shop. It is not that big but there's a warehouse the size of the shop itself where Carlos keeps some more stuff. Noel kept opening the boxes and asked me: 'How on earth did he keep all this?' So we explained to him how Carlos had managed to keep so much stuff with him and how important adidas Argentina was in producing stuff.

Guess they both had a good time in the shop. The only problem was when Carlos showed Noel one of the gifts he'd got from Gary, Ian Brown and Mike Chetcuti, a shirt signed by all Man United footballers. Noel went 'Oh No come on!!! Rooney nooo!!'  he laughed while Carlos kept waving his Man United shirt in the distance. 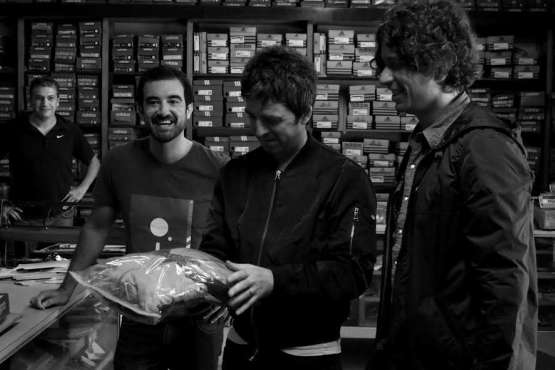 Then, it was time for the usual photos in front of all those adidas blue boxes full of vintage tracksuits - which I don't think can be seen anywhere else. They browsed a little more but did not finally buy anything. Prices are not bad but you have to be ready to pay a few pounds for some of his stock ;) Carlos just sells to collectors these days.

Almost an hour later, Noel Gallagher left the shop promising to meet us the next day for an exclusive video interview before leaving the country. 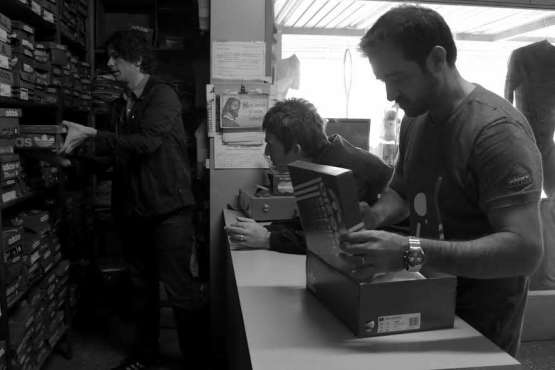